Continuing a nostalgia theme for this week’s post, here is an article from a San Antonio newspaper (The Light?  The Express?  The Light-Express?) on June 16, 1979: 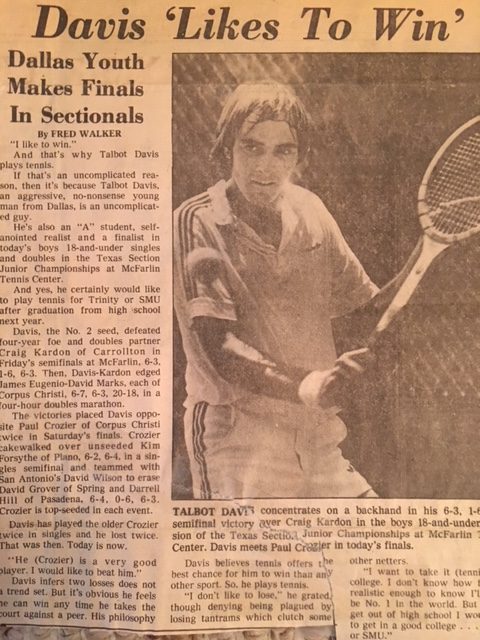 Oh the Jack Kramer racket.  The adidas clothes.  The slice backhand return of serve.  Those days are gone forever … I should just let them go …

I had just beaten friend and doubles partner Craig Kardon (who, honestly, was probably a bit better than me) in the semi-finals of the Texas Sectional State Championship.

The reporter asked me why I played and I guess my answer intrigued him.

That win set me up for the finals the next day where I beat Paul Crozier (who, honestly, was definitely a lot better than me) to become #1 in the state. That was one of those matches where, as tennis players say, I was tree’d.

I do still like to win.  It fuels ambition which is healthy.  It nourishes competitive jealousy which is harmful.

It does seem like I don’t have try very hard to hold on to 17 as long as I can.