Here I am as a senior in high school, on the far left of the picture, with Brad Stoffel and his high school tennis coach, Bill Fleming. 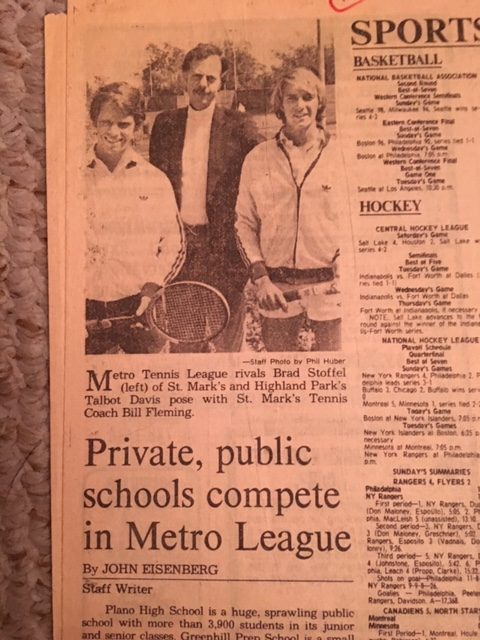 I’m posting this today because tomorrow, November 2, is Brad’s 57th birthday.  (And also because I miss all that blond hair.)

Why do I know and remember Brad’s birthday every year?

Because for the longest time as a young tennis player, I was Sisyphus and Brad was the rock.  From the time we were 12 until we were 16, he beat me fifteen times in a row in Texas tennis tournaments.  Usually those wins ensured he was the #1 player for our age group in the state and I was #2.

There is no joy in being a runner up.  I’d follow those losses with a heavy dose of tears and a flurry of vows never to pick up a racket again.

Finally, miraculously, at a tournament in Houston when we were 16, I turned the tables and won 2-6, 7-5, 6-4.  Yes, I remember the score — and what happened on match point — precisely.

That match switched the balance of power and from that day until we finished high school, I won most of our matches.

The reason we were in The Dallas Morning News on this day in 1980 was that my high school, Highland Park, and his independent school, St. Marks, were part of a hybrid public-private tennis-only league.

I remember that when we posed for the photo we didn’t speak.  And then afterwards, we grunted our good-byes and went to our disparate group of friends, likely to begin talking about the other.  Rivals, you know.

Technically frenemies, but at that stage probably more enemies than friends.

The good news is that by the time we went off to college we were able to appreciate each other and even begin to understand the pivotal roles we played in each other’s lives.  We had dinner together in New York City during that time right after college when we both lived in the Northeast.

I blogged about him about eight years ago — on his birthday, of course — and in the aftermath he phoned me from his home out west. We spoke on the phone several times, inevitably going back to some of those matches:  Do you remember me choking in the 12s?  Do you remember my tantrum in the 14s?  I remember your serve got good in the 18s.

And before you ask, yes.  I sent him copies of Head Scratchers, The Shadow Of A Doubt, Crash Test Dummies, and the rest.

When we spoke on the phone earlier this year, Brad couldn’t have been funnier or more complimentary.  “When I think about influential people in my life,” he said, “Your name comes right to mind.”