If it’s early August, that means that the best junior tennis players in the USA have converged on Kalamazoo, Michigan for the US National Boys’ 18 and Boys’ 16 and Under Championships.

Which takes me back forty years ago to when I was seeded 13th in the Boys’ 16 Championship.  Here’s a program highlighting that week, that tournament, and some of those players.  You may recognize the guy on the second row from the top, far right, in both a portrait and an action shot at the end of a backhand slice: 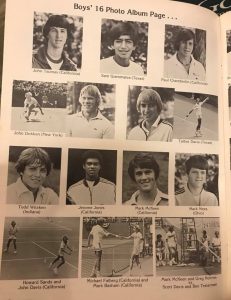 Of the players on the page above, the one who had the best pro career was fellow Texan Sammy Giammalva (top row, center) who won two pro tournaments and reached a career-best world ranking of #28 in 1985.  That’s back when McEnroe, Connors, and Lendl were topping the charts.  I never lost to Sammy, primarily because I never played him after he got so good.