Here I am, second from the left on the front row, as a freshman on the Highland Park High School tennis team in January of 1977. 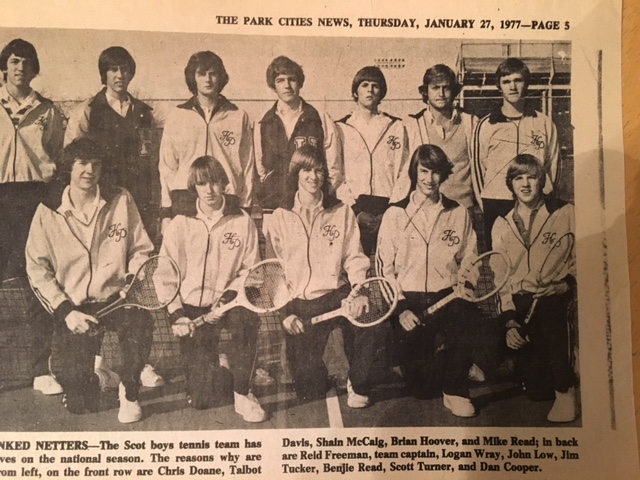 Why the sad face?  Three reasons, at least:

3. The racket.  I was using a Spalding World Open and, well, there’s a reason Spalding doesn’t make tennis rackets anymore.

That particular team was extraordinarily good.  One publication ranked us as the #4 boys’ high school tennis team in the whole USA.

To my immediate right is Chris Doane, who was a junior when this picture was taken.  The next year, when I was a sophomore and he was a senior, we formed a doubles team and won the state high school championship together.  But that’s a different #TBT with a different clip for a different day.

Chris went on to play college tennis at TCU in Fort Worth.  We didn’t have much contact after high school and I recently learned that he had a sudden aneurysm and died in 2008.

Also on the top row, third from left, is senior John Low.  History repeats itself, and when I got to Princeton as a freshman on the tennis team in 1980, there was John again, as a senior again, and tormenting me all over again with his serves, volleys, and guile.  John was one of the first players I ever saw use a large-size Prince Graphite racket.