This photo comes from an event in the fall of 1975 called the “InterZone Championships,” a Texas tournament in which our team from Dallas played against teams from Houston, Austin, San Antonio, and, presumably, Amarillo. 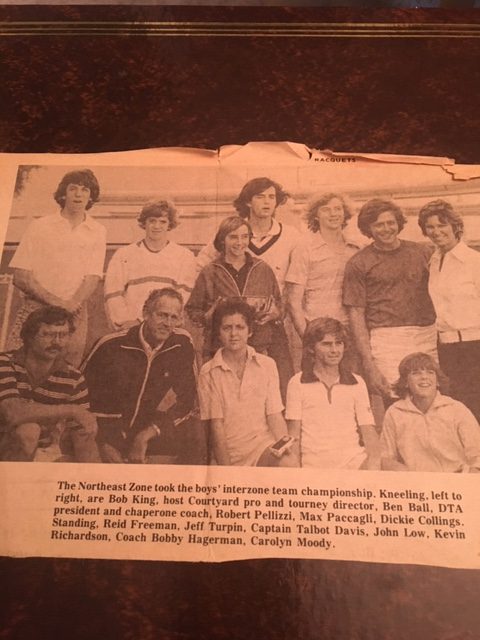 I was 14 and in the photo am surrounded by older players like Reid Freeman who went on to play for Texas A&M, John Low who played for Princeton (he was a senior when I arrived as a freshman), Jeff Turpin, who played for SMU and on the pro tour.  Coach Bobby Hagerman had played for LSU and became a regular practice partner of mine in the coming years (once I got old enough and good enough to play with him, that is).

I am also surrounded by some younger players but I don’t know if or where they played college tennis.

The good news is that our Dallas team won — I suspect that’s why I’m holding the trophy.  I remember that over that weekend I had a good attitude throughout – no whining, no complaining, no racket throwing, and, happily, no losing, either.  All those were departures from the norm.

So I also remember vividly as we received the trophy that the coaches turned to our team and said, “And the captain for the weekend is … Talbot.”  I think the pleasantness of that surprise explains the genuineness of the smile.