When I was a kid, the week between Christmas and New Year’s typically meant the Cotton Bowl.

The tennis tournament, not the football game.

That’s right.  Dallas was then and is now the host of a holiday-flavored, mostly-indoor tennis tournament.  Back in the day, the Cotton Bowl was played in the “Automobile Building,” a cavernous, barely-heated structure located at Fair Park, home of the world famous Texas State Fair.

Fortunately for me, the courts in the Automobile Building were either slick concrete (fast) or wood (faster, fastest).

Ironically, my own father Harvey Davis was one of those who helped the Dallas Tennis Association launch the tournament, which was called The Polar Bear Classic in its earliest days.

But back to the Cotton Bowl and those fast courts.  I won the 10-and-unders in 1971 and then the 14-and-unders in 1975.  Then after a few years of not playing it at all in favor of going to Florida to play the Orange Bowl or Arizona to play the Fiesta Bowl (or, during college, simply going to my parents’ new home in Austin & not playing a tournament over Christmas break), I returned during my senior year for one last hurrah in that unlikely tournament on those very fast courts.  I’d also get to introduce Julie to some of my Texas tennis playing friends from days gone by. 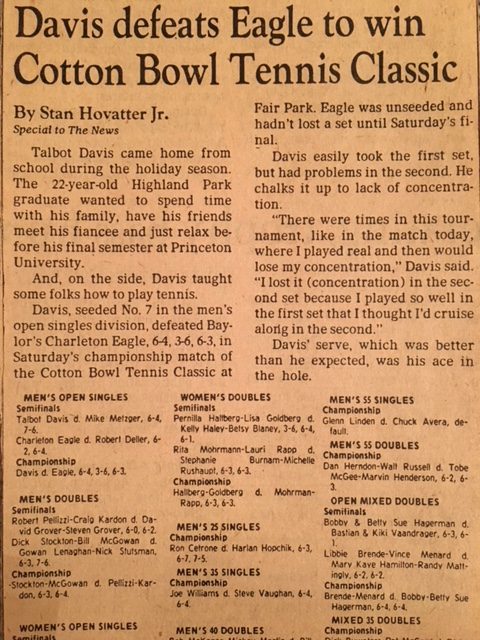 Midway through the event, I remember thinking, “I’m playing pretty well.  A few guys who are way better than me didn’t even enter.  I think I’m gonna win this thing!”

The final match was against a South African native who played for Baylor University in the late, great Southwest Conference.  I’d often wondered, “what if I hadn’t gone to Princeton but had stayed in Texas and played college tennis in this part of the world?  How would I do?”

For that week, at least, in that climate-controlled environment and on those fast courts, I might have done all right.  I well remember getting in the car after the last match, looking at Julie, and both of us asking, “can you believe what just happened?!”