#TBT — Before Blog, Before Books, The Was “The Trentonian”

Before I ever had a blog, before Abingdon Press ever started turning sermons into books, before even seminary … there was The Trentonian.

Between 1985 and 1987, I was the tennis correspondent for The Trentonian, a tabloid-style daily serving Trenton, NJ and its surrounding towns, villages, and suburbs.

My primary duty was the weekly “Tennis Scene” column, which was supposed to offer news and analysis around both local and professional tennis.

Here’s a piece from August of 1986, where in the run-up to the US Open I offer the prediction that Boris Becker would emerge as the men’s champion. 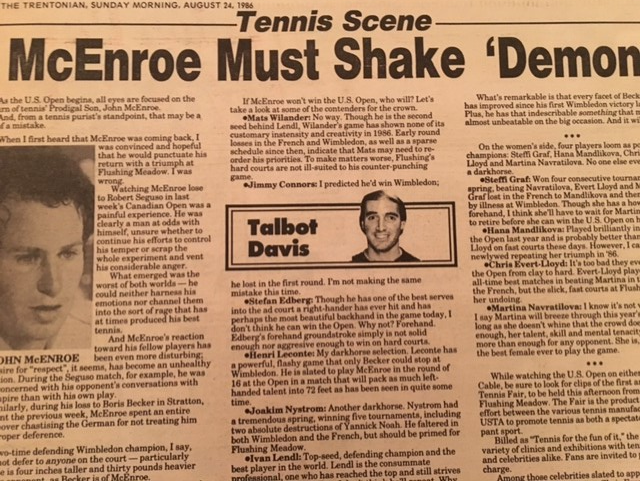 Uh, no.  It was Ivan Lendl winning his second of three consecutive titles.

One of my columns — of which I no longer have a copy — was of the now-infamous Menendez brothers.  Lyle & Erik won their respective age divisions at a major regional tournament in early ’85, and I wrote a piece on their accomplishment.  At that time, I also provided some coaching for Erik and served as a practice partner for Lyle.