In early 2000, I signed my then-seven-year-old son Riley up for tennis lessons at the Charlotte Tennis Academy near SouthPark.  The director was (and is) a very fine guy named Bill Schillings, whom I had known from his days on the Penn State tennis team.

This was part of my short-lived attempt to get Riley to love tennis.  He tolerated tennis, but loved football.  Happily, he became a weight-lifting fiend in high school, worked his way to a starting linebacker role in his senior year at Charlotte Christian School , and parlayed all that upper body strength into a state title in the 4 x 200 meter sprint relay in the spring of 2011.  So there, dad.

But back to 2000, when Riley was seven and on those courts near SouthPark.  One day, I noticed a five-year-old boy on the court adjacent to Riley’s class.  And though this boy was small even by the standards of a five-year-old, I could tell immediately that he: a) had hand-eye coordination to die for; b) displayed an advanced aptitude for how the game worked; and c) loved to play.  He was already using the Western grip everyone uses these days and, at five, was generating a remarkable level of topspin on his shots.

Bill Schillings told me the boy’s name and introduced me to his father.  So I said to dad (without giving him my entire tennis resume, though I badly wanted to), “I’ve been around this game a long-time and I’ve never seen a five year old able to do what your son is doing.  That is a rare talent.”

Why am I telling you this odd tale from a random tennis court seventeen years ago?  Because that boy’s name was Thai-Son Kwiatkowski and on Monday he won the NCAA Men’s Singles Tennis Championship.  He joined an impressive line of NCAA titlists that includes both John McEnroe and Jimmy Connors.  And Thai-Son won that individual title after leading the University of Virginia to three straight team titles.

So I guess I’m saying that if you see me a little less around the church in the next few years it’s because I’m pursuing a new career as a tennis talent scout.

Here’s Thai-Son in a graphic supplied by the UVA Sports Information Department: 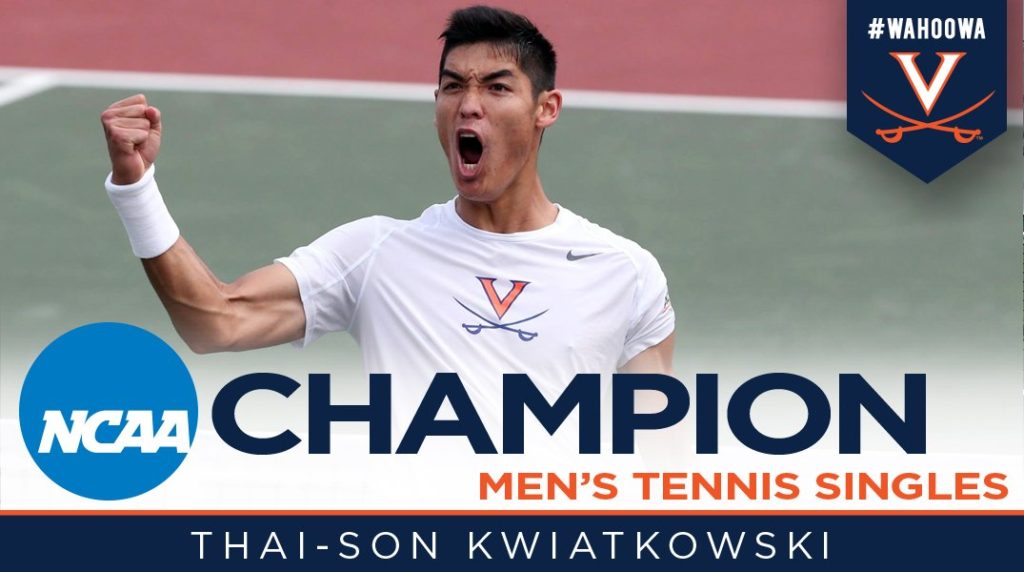