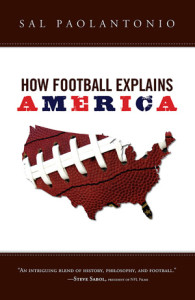 As a staff, we’ve begun reading Sal Paolantonio’s book How Football Explains America. It’s a fascinating read, one that explores how football is so much more than just one game among many within the American psyche.

Football instead is an expression of our 19th Century belief in Manifest Destiny; it is a weekly morality play featuring “good” and “evil”; it even reflects the uniquely American need to congregate, regroup, and plan . . . in other words, to “huddle.”

So why should a church staff study a book that on the surface has so little to do with church?

In the grand scheme of things, I want us reading books like this so we can better understand the culture within which we minister. The more we “get” people’s values, assumptions, and desires, the more we can speak Christ into their lives. It’s why later this year we’ll read a seminal book on cultural communication called Made To Stick.

But beyond that, we recognized in reading How Football Explains America that many of the elements which contribute to a football team’s success or failure do the same with a church staff. Cliches, but they are true: