So yesterday’s service concluded with something we’ve never done before as we invited people to respond to the sermon by purchasing a book we made available in the lobby.

Here’s the background. The message came from Acts 11:19-26, a little story from the early years of the church in which nothing much appears to happen. Upon closer examination, however, everything happens in that story: Paul and Barnabas settle down in the city of Antioch and for a year invest in the lives of the new Christians there by teaching the stories of God and declaring the truths of Christ.

The episode demonstrates that when it comes to the Holy Spirit, the steady is as supernatural as the spectacular. In other words, the Holy Spirit is as much about the consistency of discipleship as he is about the euphoria of conversion.

Enter Timothy Tennent’s brilliant set of reflections on the Apostles’ Creed, This We Believe. 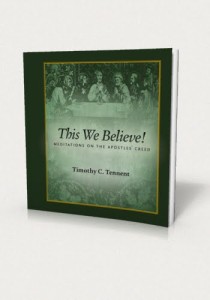 I had used this little book for my own devotions back in the fall and was amazed and moved by the ways in which Tennent uses everyday language to explain the deepest truths in the universe. Tennent’s thoughts on the Creed inspired my preaching for the But For The Grace Of God series in particular.

I’ll admit a bias in favor of Tennent: he’s the president of Asbury Seminary, my much beloved alma mater.

So we bought 600 copies of the book in advance of yesterday’s service, figuring one edition for every four people who might show up on a Sunday.

We then sold them after each service (though I noticed some people picked their copies up before church even began!).

Why sell them? Not to make money — we still don’t allow fund raisers here and took a slight loss on the whole project.

And not to mimic the money changers in the temple — Jesus’ anger at those folks was stirred by the usurious interest rates they charged their fellow worshippers and not because they were supplying people with discipleship materials (they most definitely were not!).

We sold the books so that people would have their own “sweat equity” in engaging the truths of God. As one preacher said, “that which we obtain too cheaply, we esteem too lightly.”

So we charged the same $5 per copy that we paid for them in the first place. I loved seeing the large crowds of people after the 8:30, 10, and 11:30 services lining up to get their books.

(We have a handful of copies left for any of you who weren’t able to pick one up yesterday; just stop by the church office.)

In the end, it’s deeply rewarding to me that this morning, hundreds of households at Good Shepherd began the day by soaking up the riches of what it means to say

I believe in God the Father, maker of heaven and earth . . .