Something Different With The Raising Of Hands

One of the things that first strikes newcomers to Good Shepherd  is the amount of hand raising that happens during praise and worship.  Occasionally people even tell us how, um, un-Methodist it seems. 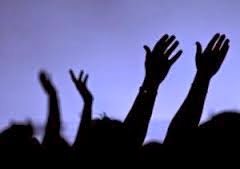 Not everybody and not all the time, mind you, but certain songs really get our congregation going.  Sing To The King, In Christ Alone, The Great I Am, and Jesus Paid It All among others are sure to have a healthy percentage of Good Shepherd-ites looking like they’d fit in better at First Assembly Of God than they would at First United Methodist.

Why do people raise their hands when they sing?  Well, I Timothy 2:8 says this:

8 Therefore I want the men everywhere to pray, lifting up holy hands without anger or disputing.

So there’s biblical warrant for the practice, even if we do it more during song than during prayer.  I’ve settled on a couple of reasons why there’s hand raising at GSUMC and many other congregations:  1) it‘s a way for the worshipper to say “I surrender.  I believe what I am singing deeply enough that I will do this odd looking thing of raising a hand while I sing.”  2) More to the point, it’s a way to say, “I agree with the content of this lyric.  I am signalling my agreement with my raised hand.”

That second reason — agreement — is behind something I did during yesterday’s message that I’ve never done before.  Midway through the sermon came time for me to read Philippians 2:6-11, some of the loftiest language about Jesus ever penned.  So I told the congregation that I was getting ready to read these exalted words out loud for them, and that I was going to read them slowly, and then I reminded them of their propensity to raise their hands during really good songs.

Then came the challenge:  “Nowhere in the bible does it say you can only raise your hands during music.  When you raise a hand you are declaring that you agree with what is being spoken, read, or sung.  As I read these matchless words about Jesus from Philippians 2:6-11, raise a hand when I read something with which you agree.”

And then I began to read:

5 In your relationships with one another, have the same mindset as Christ Jesus:

6 Who, being in very nature[a] God,
did not consider equality with God something to be used to his own advantage;
7 rather, he made himself nothing
by taking the very nature[b] of a servant,
being made in human likeness.
8 And being found in appearance as a man,
he humbled himself
by becoming obedient to death—
even death on a cross!
9 Therefore God exalted him to the highest place
and gave him the name that is above every name,
10 that at the name of Jesus every knee should bow,
in heaven and on earth and under the earth,
11 and every tongue acknowledge that Jesus Christ is Lord,
to the glory of God the Father.
And when I looked up from my bible at 8:30, 10, and 11:30, I was welcomed with the most glorious sight: a roomful of people making a silent declaration with raised hands that they agree with Paul’s description of Jesus as both risen Lord and returning King.
After a moment like that, preaching the rest of the sermon was easy.