Some Thoughts On A Vacation

In between Sunday, July 21 and Saturday, July 27, my wife Julie and I spent a vacation week at Hilton Head Island, South Carolina, with our 23-year-old daughter Taylor and 20 year-old-son Riley.

Here’s what the three of them looked like on a windy Friday night outside The Old Oyster Factory: 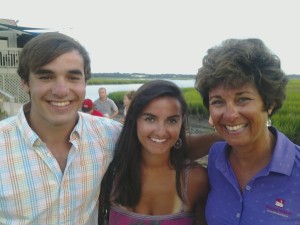 But there are a few things you need to know about these vacations we take:

1.  We have been going to Hilton Head every year since 1997 — in other words, when Taylor was seven and Riley was four.

2.  We always stay at the same vacation property.  This year, we even arranged to stay in the exact same unit as last year.

3.  We do the same thing on the same night every year.
Sunday = preach, drive down, move in, shop for the week’s groceries, hamburgers
Monday = barbecue chicken
Tuesday = eat out (for years it was Fuddrucker’s and then Julie and I decided to upgrade to Outback amid much opposition).
Wednesday = pork chops, followed by Pirate Island Miniature Golf.  That particularly unfortunate tradition started when RILEY WAS FOUR and obsessed with pirates; now that he’s 20 and has expanded his interests somewhat, we thought we’d get a break.  No such luck as our kids insisted the ritual remain.
Thursday = steak
Friday = eat out for the last night; always fish as a nod to Julie’s Roman Catholic upbringing and its rules for Friday dining.  That’s why the Oyster Factory picture above.  Friday fish is always followed by walking on the beach.
Saturday = check out.
Sunday = preach again

Why in the world would we be so . . . predictable?  Why does our daughter insist on the same activities we started when she was seven, especially in light of the fact that now when we depart, she gets in her own car and drives to her own home in Atlanta, thank you very much?

I believe the answer to our apparent anal-retentiveness has to do with the power of memory, tradition, and stability in the lives of children.

Which is another way of saying it has to do with the role of marriage.

Yeah, marriage is about much more than marriage, and an annual vacation can show you why.

Anna Quindlen sums it up as well as I’ve ever heard it.  I shared these words with you back in April, but they are even more appropriate as a close to this post:

If a marriage is to endure over time, it has to be because both people within it have tacitly acknowledged something that young lovers might find preposterous:  it’s bigger, and more important, than both of us.  It’s love, sure, and inside jokes and conversational shorthand.  But it’s also families, friends, traditions, landmarks, knowledge, history.  It’s children, children whose parents’ marriage is bedrock for them even if they’re not children anymore.  Perhaps especially if they’re not children anymore.