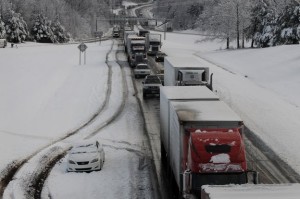 So I spent the first half of the day at home before venturing out this afternoon.

It all got me thinking to snow days gone by.

Growing up in Dallas, Texas, we didn’t have too many of them. In fact, I remember several very serious ice days — when the city would be covered in a sheet of ice. We’d play ice hockey on Rosedale Avenue, the street where I grew up.

Me and hockey. Not much of a combination.

When I went to college in New Jersey, snow days of course became a regular occurence. I was so ill prepared — the wrong kind of coat, the wrong kind of boots, the wrong attitude for survival when the temperature went below zero. And because it was a pedestrian campus, we never missed class because of the weather. I just kept falling on the ice while on the way to the lecture hall or tennis practice. You wonder why my call to seminary came with a call to escape New Jersey?

In ministry, preachers want one of two things when it comes to snow and Sundays: 1) A full blown blizzard that cancels services and lets you preach that same sermon the next week; or 2) nothing. The worst is a half-hearted storm where it’s not bad enough to cancel but still uncomfortable enough that attendance will be way down. That’s sort of what happened Sunday morning — we were down by about 250 people compared to our average for the year. I was frankly amazed and grateful that anyone came out.

So for next Sunday . . . prayers for cool, clear weather.