Should You Preach OTHER PREACHER’S Sermons?

That’s a loaded question, isn’t it?

Is it ever appropriate for a preacher — regardless of his or her level of experience — to preach sermons that have for all practical purposes been prepared by someone else?

It’s not only a loaded question, it’s a relevant one.

Chuck Swindoll, for example, tells of the time his Insight For Living ministry received a frantic note from a local pastor who was agitated that IFL had not posted any content that week.  “What will I preach on without it?” came the plaintive question. 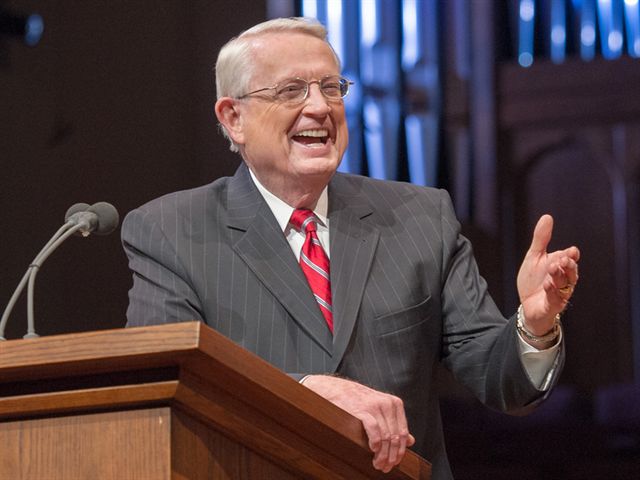 On a more serious note, a pastor in our city was relieved of his duties a decade or so ago.  The cause?  Sermonic plagiarism of messages he discovered online and preached as if they were his own.

Which circles back around to the title question today:  should you ever preach someone else’s sermons?

When I was first asked that question, I went back over my own preaching history.  While still at Mt. Carmel UMC in Monroe, I began listening to Chuck Swindoll on the radio.  That voice!  That content! That conviction!  I remember that his series called Building Blocks Of Christian Character gave me a special kind of inspiration.  So special, in fact, that I had a Mt. Carmel series called Constructing Character.  Inspired by, but not a copy of.

Then a decade or so later I heard a number of Andy Stanley sermons and immediately asked myself:  “how is he able to both teach me something new AND make me cry every time?”  So I acquired his Go Fish series which we adapted and used at Good Shepherd in 2006.  But — and this is ironic — although I was inspired by his Go Fish sermons, I nevertheless “improved” them by turning them into multi-point messages.  Oy vey!

By the time we did Breakaway in 2007, I had learned that the reason he could both educate me and reduce me to tears was that he was giving ONE POINT SERMONS, and so in our adaptation that time I followed his model much more closely.

Finally, we did The Office in 2010, and it was inspired by the staff of Granger Church in Indiana.

In each of those cases, we adapted and did not not copy directly and, as far as I remember, gave credit to the original content creators.

One other historic — and current — note in this question:  in our efforts to ensure that Good Shepherd is ONE church in TWO languages, Sammy Gonzalez and I preach the same series, Scripture, and bottom lines.  However, Sammy personalizes the messages … so that when I talk about tennis and Texas, he speaks of basketball and Connecticut!

So the question should you preach OTHER PREACHER’S sermons is probably the wrong one to ask.  The answer to that one is “no,” especially if you want either job security or personal integrity.

However, if you ask should you continue to listen to and learn from preachers you respect and even adjust your own content and delivery accordingly?  the answer is ABSOLUTELY.  In particular, I believe that young preachers should drink deeply at the well of a variety of mentors from different church expressions.  I know that my own preaching has grown because I’ve paid close attention not only to Andy Stanley and Chuck Swindoll, but also to Tony Evans, Jack Hayford, and Andrew Forrest.  My prayer in each case is that by learning from their design and delivery, my own creativity and content would increase.  Not to mimic, but to glean.  Not to copy, but to shape my own voice and style.

The happy consequence of all this in my case is that because of both my work with Abingdon Press and my Simplify The Message & Multiply The Impact preaching workshop with Western North Carolina pastors, other churches are gleaning from and are inspired by what we do at Good Shepherd.  I know of churches that have had their own versions of Head Scratchers, Solutionists, The Storm Before The Calm, and, of course, Crash Test Dummies.

There’s one other way of looking at the question should you preach OTHER PEOPLE’S sermons and it struck me with some force earlier this week.  I am currently working on a series called #Brave (inspired by but not copied from Jim & Jennifer Cowart in Georgia) and the particular subject reminded me of  messages I delivered early in my tenure at Good Shepherd — 2000 and 2001.  So I looked through some old files and saw some of what passed for sermon series in that time.

And I realized immediately:  “oh I preached THAT series because I heard people were saying THIS about my preaching.”  Or:  “I did THIS series in response to what THAT person told me our church needed.”  Or:  “If I do THIS one, then I’ll really be a leader around here.” And in all those cases, what I saw in the files filled me not with nostalgia but with remorse.

I might not have preached sermons from OTHER PREACHERS  but I was doing something even worse: preaching to appease OTHER PEOPLE.

And those are the kind of sermons I am quite sure you should never preach.