In preparing yesterday’s message (which took place about six weeks ago), the flavor of the entire series got turned around.

Well, in getting the first three messages ready, I had pretty pedestrian sermon titles (Signed, Sealed, Delivered may have been one of them).  But then when I got yesterday’s ready and realized that The Epic Fail Hero was the ideal title, I then realized I could and should re-title all the earlier ones I’d gotten ready.  That’s where The What Can Brown Do For You Hero and The Maybe Hero came from, for example.

It also freed up some of the future titles for the series, culminating in my favorite one, The Sugar Momma Hero which will happen on Nov. 23.

I thought about bringing a my tool box up here as a prop today.  Except I don’t have a tool box.  Why?  Because anytime I get some tools to try to build something, fix something, assemble something, it doesn’t work, I get frustrated, words come out of my mouth that shouldn’t oughta come out of any preacher’s mouth, and I throw the tools across the room and quit.  Me + tools = an epic fail.
We’ve got those, right?  Or in track & field: 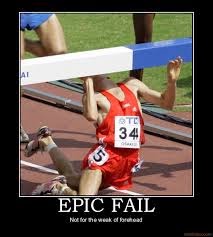 Or on wedding days 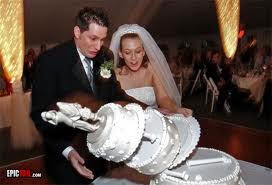