Quick & The Dead & The Sons Of Men

I have long loved to preach on what many in the church call “end times.”

Two primary reasons:  1) it is a great chance to correct what I perceive to be false teaching on the subject . . . namely, the Rapture-based eschatology made popular by the Left Behind series of novels, movies, and trinkets; and 2)  it’s also an opportunity to help people think theologically about life, death, and the march of time.

Yesterday’s message on the part of the Apostles’ Creed that says from thence he shall come to judge the quick and the dead was especially fun for two additional reasons:  1) contrasting end times charts between “Left Behind” theology and the mainstream evangelical understanding that Good Shepherd embraces (thanks to James-Michael Smith & you’ll see them below) and 2) one of my favorite bottom lines/refrains:  You won’t get away with what you got away with.

Here is a rough manuscript of what got said yesterday:

This might just be the Old School talk I’m looking forward to the most.  You know why?  Because it has my two favorite words in the entire creed!  “Thence” and “quick.”  Aren’t they great?!  Now I didn’t grow going to church all that often as a kid, but when I did start going as a young adult and when I did start reciting the Creed as part of that experience I always loved saying that part even though I had no idea what it meant.  But when and how else can you ever have a sentence with “thence” & “quick & the dead” in it?

So is it OK now that I am no longer a young adult if I remove the mystery from it?  “Thence” means “there,” as in I came up to this platform from “thence down thar” where I was sitting.  Or, in the case of Jesus & the creed, he’s is coming from “there in heaven” where he has been reigning.  And “quick” means “living” as in inviting all people into a quick relationship with Jesus Christ.´ Or, in the case of Jesus & the creed, when he comes back from “there” (thence) he will judge the “living” (quick) and the dead.  All of them all at once for all time.  So at some unknown point in the future, at the end of all our tomorrows, Jesus will descend from heaven (where he’s been in charge whether we know it or believe it or not) and he will do so in the opposite fashion of his first coming. The first coming was in humility, hidden, powerless, as an infant.  The next time will be in victory, unmistakable, in all power, and as a conquering king.  That’s what this part of the Creed tells us: Jesus is coming back and it won’t be anything like that first advent.  He’ll judge all of us all at once for all time.
Now: I haven’t told you what I’m going to tell you.  Yet.  That’s coming.  But to get there, can I explain something to you?  The fact that the Xn faith believes in an end, a resolution, beyond which we have only hints and shadows other than to know Jesus will rule and it will be good, is one of several separating points between Xnty and Eastern religions.  Hinduism and Buddhism see time as endlessly cyclical – time reincarnates just like people do! – and the goal of human existence is to get off the cycle and be absorbed into the universe.  Xnty sees a BANG at the beginning and a BIGGER BANG at the end.
Because look at 2 Thess 1:7b-10 where it begins with “this” (and in a few minutes I’m going to tell you what the “this” means!):

This will happen when the Lord Jesus is revealed from heaven in blazing fire with his powerful angels. 8 He will punish those who do not know God and do not obey the gospel of our Lord Jesus. 9 They will be punished with everlasting destruction and shut out from the presence of the Lord and from the glory of his might 10 on the day he comes to be glorified in his holy people and to be marveled at among all those who have believed. This includes you, because you believed our testimony to you.


Now: can I point something out?  To understand best what the bible means when it talks about the Second Coming – and after all, the Creed is a condensation of teachings from the bible – DON’T go to the book of Revelation.  Only rarely is that book ever about that subject – it’s the book of Rev, not the book of Predictions as so many have turned it into.  Instead, go to places like the one today in 2 Thess (as well as I Thess 4, 2 Peter 3) that teach on the subject with great clarity.

And you can tell from the 2 Thess, can’t you, that Jesus is coming back secretly to take his church out of trouble and then coming back a 2nd (3rd) time 7 years later, right?  Wrong!  2 Thess 1 lets us know he is coming back boldly, unmistakably:  blazing fire, powerful angels, meting out punishment and doling out blessings (1:10).  A lot of the conjecture you may have heard about church people being whisked away secretly before 7 years of tribulation and THEN he comes back flies in the face of what Scripture teaches.  It’s so funny, I came across this chart someone drew up of the end times: 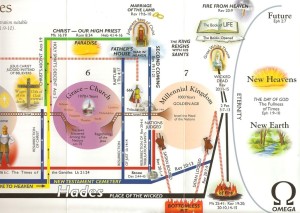 Well I got a chart, too!

Unexpected time, unmistakable way, and what we now believe by faith (Jesus rules) we’ll then see with our eyes.  Why people spend so much time and money bringing confusion where the NT actually has clarity I’ll never understand.

Here’s one other thing you should know: many times people will tell you to “watch the signs” or “count the times” because you never know when we could be entering the “last days.”  Well, look at Acts 2:17:

“‘In the last days, God says,
I will pour out my Spirit on all people.
Your sons and daughters will prophesy,
your young men will see visions,
your old men will dream dreams.

What does Peter say we’re in?  The last days!  Ever since Spirit was given and the church was born we’ve been in the last days! God’s calendar is different from ours!  We’re to live as if his return could be any day.
And I know what some of you are thinking because I think it myself:  what in the world does this have to do with me? You SAY it could happen any day but I don’t really believe it. What in the world does all this have to do with my life today?  I am so glad you asked!  Remember the “this” that began the words in 2 Thess 1 and I said we were going to come back to it and explain what the “this” is?  Now’s that time!  Look at 1:5-7a:

All this is evidence that God’s judgment is right, and as a result you will be counted worthy of the kingdom of God, for which you are suffering. 6 God is just: He will pay back trouble to those who trouble you 7 and give relief to you who are troubled, and to us as well.


READ.  So the central part of that return:  Jesus comes as a judge.  With a robe and a wig and sitting behind an enormous desk?  Probably not.  But there is this unmistakable pattern in the NT:


Acts 17:31:  31 For he has set a day when he will judge the world with justice by the man he has appointed. He has given proof of this to everyone by raising him from the dead.

Romans 2:16:  This will take place on the day when God judges people’s secrets through Jesus Christ, as my gospel declares.

Romans 14:10:  For we will all stand before God’s judgment seat.

2 Corinthians 5:10: For we must all appear before the judgment seat of Christ, so that each of us may receive what is due us for the things done while in the body, whether good or bad.