One of my family’s favorite songs is Red Dirt Road by Brooks & Dunn.

It is a song that, in the best of country tradition, you see as much as you hear.  More to the point, it speaks to origins, nostalgia, and home.  In our little family, we all have our Red Dirt Roads:  Mine is Dallas, Julie’s is in Woodbridge, New Jersey, and for both our kids, it’s Monroe, North Carolina.

Speaking of which, Monroe is my Red Dirt Road of preaching, as my first (and only other) assignment was to Mt. Carmel & Midway UMC there from 1990-1999.

And this week, I’ve been back on that Red Dirt Road, preaching Mt. Carmel’s annual revival.  I’ve been doing a series called Lost & Found, based on the ministry of Elijah from I Kings 17-19.  Elijah’s signature miracle happens on, ahem, Mt. Carmel.  The revival concludes tonight at 7 with a message called Lost Hope.

In preaching terms, can you ever go home again?

I think I’ve changed a lot in 17 years, but most of the folks at Mt. Carmel think I’m exactly the same.

I know more about how to lead a church, how to harness technology, and even how to deliver a message than I did in the 90s.

But I know a little less about slowing down, sitting down, visiting with people, and checking on their spiritual lives even when there is no presenting crisis.  That’s what you get to do pastoring a small-ish church in a smaller town.  That almost never happens at a place and among a people like Good Shepherd, where it seems I’m needed more for leadership and less for socializing; more in crises and less in serenity.

In the end, I do know that I learned all my foundational lessons of preaching and pastoring on that Union County red dirt road, and did so among a group of people who were both optimistic about the future and patient with their (then young) pastor.

This photo was taken last night at Mt. Carmel & I’m standing with Lynn Greene whom I met on June 26, 1990, the very day we moved into the parsonage at Mt. Carmel and the church hosted a reception for us.  A reconnection like that is what a preacher’s red dirt road is all about. 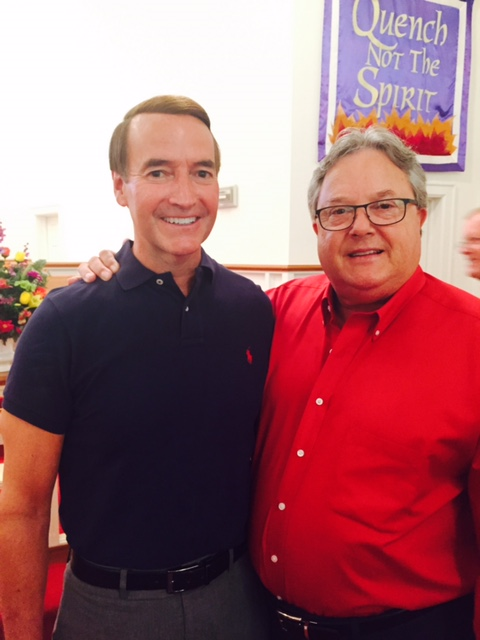