How An OLD Photo Draws Yet ANOTHER Connection Between Preaching & Tennis

This photo comes from the 1980 Texas Sectional Junior Championship (the This-One’s-For-All-The-Marbles state tournament) in San Antonio. 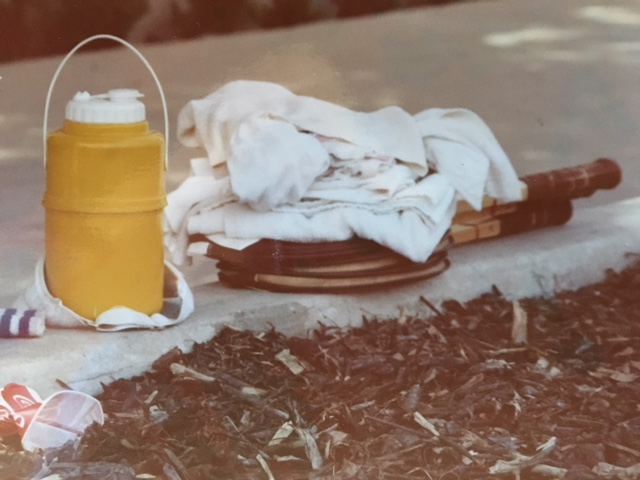 It’s hardly an action shot, is it?  Either my mom took it or the mother of a friend took it; either way, it shows my typical tennis pile as I waited for a match:  water jug, wrist bands, extra shirts, towel and THREE Wilson Jack Kramer Autograph rackets.   Why three rackets?

Because that was the absolute minimum number any good player would take on court with him.  That way, if a string broke during the match — or, just as likely, if I banged a racket on the court in frustration and the whole thing broke — I’d always have a spare.

“So Talbot,” you’re thinking, “that’s fascinating.  But how in the world does it relate to preaching like you promised it would?”

Glad you asked. This past Sunday, Chris Macedo’s guitar died during the 8:30 service.  Just died.

In the same way, my left contact lens (I am now using daily wear) simply did not work.  When I opened the bible to read it during the early service, all I saw was blurred lines.

Now: what to do in the middle of a Sunday morning with a dead guitar (too dead to gently weep, by the way) and a malfunctioning lens?

Well … just like San Antonio in 1980 … Chris had a spare guitar in his office and I keep a spare pair of lenses in my briefcase.

So at the later services, he could play his guitar and I could read my bible.

Wanna ask me how I did in that tournament in 1980?