So I’ll use the post title for my opening sentence:  my mother met Doris Kearns Goodwin yesterday. 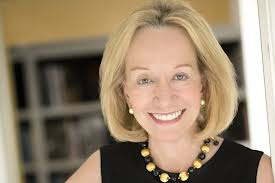 I suppose on the one hand, that’s not so remarkable.

Doris Kearns Goodwin is a decorated presidential historian and has published massive biographies of Abraham Lincoln, John F. Kennedy, and Lyndon B. Johnson.

Her latest effort is Bully Pulpit which traces not only the origin of that term but also the complicated relationship between Theodore Roosevelt and William Howard Taft.  Who knew?

As authors tend to do, Kearns Goodwin is on a book tour in support of Bully Pulpit and that tour landed her in Austin (at, appropriately enough, the LBJ Library on the campus of the University of Texas).

And that’s where my mom fits in.  She lives in Austin, is herself an avid reader and published author, and counts Kearns Goodwin as among her favorites.  Here’s what she wrote to me about going to the book signing:

Waiting in line for at least 20 minutes, I was able to get an autographed copy of her newest book (7 years in writing), Bully Pulpit, Theodore Roosevelt and William Howard Taft.  It may take me 7 years to read, but I’ll love every word.  She and I exchanged a few words.  She was impressed that I had seen the Roosevelts and remembered WWI.

Let that last sentence sink in: “she was impressed that I had seen the Roosevelts (as in Franklin & Eleanor) and remembered WWI (that’s #1, not #2).”

It just got remarkable because my mom was born in 1915.

It’s kind of fun having a 98-year-old mother who refuses to abide by the laws of nature and expectations of society.