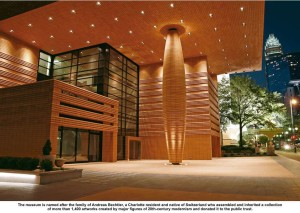 Yesterday, I took the staff on a field trip to the Bechtler Museum of Modern Art in center city Charlotte. It’s a spectacular place.

We joked that we were going “uptown and high brow.” So we did.

We also had a charming “docent” — which is a cool name for a tour guide — who led us through the various exhibits.

I noticed a recurring theme in her comments: what the author intends to communicate with his or her art and what the audience receives from that same piece are not one and the same. The one viewing the art may well “see” far more, far less, or far different than the artist ever intended to convey.

In the world of literary art (a world with which I am more familiar), many critics take that thought a step further. In many circles of literary criticism, the author’s intent is irrelevant; as soon as it leaves his or her pen (or typewriter or keypad), the text assumes a life of its own. Interpretation, then, is often separated from intent.

Well what does all this artistic talk have to do with theology? With biblical interpretation?

Quite a lot, as it turns out. Because the theory that dismisses authorial intent has crept into biblical studies.

And if the original intention of biblical authors is indecipherable at best and irrelevant at worst, well, the interpretation and application of biblical texts of course becomes highly personalized. The text means whatever you want it to mean.

All of which has led to what orthodox Christianity considers to be erroneous teaching on the nature of salvation, the practice of sexuality, and the function of the church.

In contrast, I hope to stand with a long line of preachers and teachers who believe authorial intent matters a great deal, and that the task of the church is to excavate that original meaning as much as possible and then make contemporary application of it.

Because in the world of biblical literature, we want what the author intends and what the audience receives to be one and the same.