So here’s something I’m pretty sure about: no one came to church today hoping that you would be MORE discouraged when you left than when you arrived. No one. No one was like, “I’m just too peaceful and too content and I hope someone says something or sings something or prays something that just sucks the life out of me! I’m too peaceful, I need more trauma, so I’m going to church!” Of course not. It’s much more likely to be the reverse. “I feel trauma, I need peace. I feel anxiety. I need serenity. Maybe church will help.” Of course, that’s much more common.

Because I don’t know if you’ve realized this or not, but we really are in a world of trauma. People have been through it – militarily, romantically, professionally, at the hands of their own family. Starting with things you were exposed to as a kid and continuing on through to the way the hits keep coming even today. Traumatic event imprint themselves on your brain and it’s like anxiety and depression get burn in with it. We’ve got a good number of vets with us and they USED to call this getting “shell shocked” and now it’s called, more clinically, PTSD and sometimes, I wonder if we minimize the real thing with all the ways we borrow it for lighthearted labels. You know, “I have PTSD from that chemistry exam.” Or “I went on the middle school retreat and now I have PTSD.”

Sometimes, it’s accurate, other times it’s exaggeration, I suppose. But whether you have been diagnosed with PTSD or something else the anxiety/depression continuum, you did NOT come here today to get more of. You didn’t come so that you’d leave with higher levels of anxiety and more acute feelings of trauma. You came to lower all of that. You came so that 2 Cor 4:16a – therefore we do not lose heart – would be yours. Along with everyone else around you, you want what Paul has. A not lost heart. A sense of peace, chill, calm.

You know why everybody wants what Paul has at the beginning of 4:16? Because what comes before v. 16? Well, yeah, all of chapter 4 but in particular check out 4:7-10:

7 But we have this treasure in jars of clay to show that this all-surpassing power is from God and not from us. 8 We are hard pressed on every side, but not crushed; perplexed, but not in despair; 9 persecuted, but not abandoned; struck down, but not destroyed. 10 We always carry around in our body the death of Jesus, so that the life of Jesus may also be revealed in our body.

Some of you who went to church in the early 2000s, you’re remember that song (Yes, Lord, yes, Lord ….). But more than that, you can see from these words even without that song that Paul and his companions endured a tremendous amount of trauma. We know from I Corinthians some of the contents of what he’s talking about; whipping, arrest, shipwreck, and more. We also that he ultimately died in Rome, of beheading. Can we admit that getting beheaded can be traumatic?
So it is no exaggeration to say that Paul “deserved” PTSD and yet what does he say in 4:16a? We do not lose heart. I’m chill. I’m good. I’m at peace.

How in the world did he get THERE? How in the world, after all he’d been through and all he continued to go through, did he arrive THERE? What a question to ask and what an answer to want because I just know that so many of you have brought that same thing with you. Some of you are vets and it is stuff you saw that you can’t unsee. Others, there are bruises from abuse that you can’t unfeel. Other’s there is hurt from losses, both expected and unexpected, and the hurt lingers way past the time when other people think you should be “ok.” And then for others, it’s not tied to a circumstance it’s just there; you daily feel like you’ve been through the ringer, anxiety & uncertainty are the result, and you’d give anything if you could have the thing that Paul had. Life has stolen your peace and you’ve come to church to steal it back.

13 It is written: “I believed; therefore I have spoken.”[b] Since we have that same spirit of[c] faith, we also believe and therefore speak, 14 because we know that the one who raised the Lord Jesus from the dead will also raise us with Jesus and present us with you to himself.

Oh my gosh. 4:14 is perfect. Paul identifies the source of his peace & his ability to keep his heart as the resurrection. And not just Jesus’ resurrection but something profound that emerges from it: Jesus’ resurrection is a downpayment on ours. What happened to Jesus’ body on Easter will happen to ours for eternity. Which means that Paul’s serenity for NOW is rooted in his certainty for THEN. My peace, he says, comes from my assurance of where I’ll be and in whose presence I will be forever. Not a vague, trendy, God who looks a lot like me, but a specific THIS MEANS THIS God of resurrection who has identified my body and my soul as the beneficiary of his downpayment.

Oh I love this, too1 Outward decay and inward renewal AT THE SAME TIME. Every one of us who has a body … any exceptions? … that body is one moment closer to death than it was a moment ago. Gulp! But because Paul locates his identity and his definition in Jesus’ downpayment (and after all Jesus PAID IT ALL!) that gives him a kind of holy anticipation, not an unholy dread. More gold in 4:17:

17 For our light and momentary troubles are achieving for us an eternal glory that far outweighs them all.

Oh, wow. “Light” there doesn’t mean so much “easy”; it just means of shorter duration than the glory that awaits. It’s the comparison between a “finger” snap and waiting for Christmas. Instant vs. insanely long!
And then culminates in 4:18, which could have been the riff for the whole message but then we’d have missed all the depth that came before it:

Oh, so much here, in what has suddenly become quite possibly my favorite section in Scritpure. A traumatized man finds peace in another man’s trauma (Jesus’) because what happened to Jesus in history will happen to Paul for eternity. The source of his peace is the certainty of his place. And eternity it longer, heavier, weightier than history. And somehow Paul has trained his mind and his eyes to focus on the promise to come and the place that’s reserved, and that helps keeps his anxiety and trauma in perspective. His eternal focus brings peace; his outlook makes life make sense. Here it is, for the NONE of you who more anxiety and the MANY of you who long for encouragement: You’ll only have peace in this life when you know your place in the next one.

That’s not escapism. It’s not avoidance. It’s perspective. It is the rational understanding that this life really is a vapor, a mist, and eternal life, in comparison, really is Niagra Falls. Life only makes sense here when you know your destination there. I can’t tell you how many times when pimples would go bump in the night that I could get through the next day by remembering: there is coming a day with no heartache, no pain, and silky smooth skin for eternity. You’ll only have peace in this life when you know your place in the next one.

Let me show you what I mean. Because we need a demonstration. Remember the contrast of 4:17? Light, momentary struggles contrasted with eternal weight of glory? It’s like this (TWO BATHROOM SCALES, A SEVEN YEAR OLD AND ME). Who weighs more? Duh! That’s perspective. This is our trauma, even the worst of it, today. This is the glory that awaits … it’s heavier and weightier. You’ll only have peace in this life when you know your place in the next one.

Or I think about the man in our church awhile back in some declining health. In the hospital, tied up to all kinds of machinery. Oxygen coming in. No mobility, no enjoyment. So we’d see him and what would he say? Nothing about his health. No complaints about his trauma. “I’m ready. I know where I’m going and whose gonna meet me and I’m ready.” That’s what it is. It’s seeing life from the end back and since you know how the end ends, it makes everything before it make sense. Even the stuff that doesn’t. Because of your certainty that every wrong will be made right and every hurt healed and those apply to you, whew, you can endure. You’ll only have peace in this life when you know your place in the next one.

And note what 4:17 says again: “glory.” This eternity I am talking about is not all about you. I doubt you’ll improve your golf handicap or your ability to do crossword puzzles. You won’t want to. You’ll bask in his glory, grateful for his sacrifice, in awe of his grave thwarting power. And there is even this sense in 4:17 that the troubles you face – the very ones that brought you here so that you’d leave with encouragement and not discouragement – are preparing you for what’s better on the other side. That in his wisdom, God engineers difficulty on this side to make us long for peace on the other. As Everett Piper says it:

Hell is full of those who shout they’re victims; those so concerned with their dignity, identity, grievances, passions and rights. Heaven is the home of only those who don’t care a whit about such secondary things but rather find their virtue in Christ.

And 4:18: READ. Fix your eyes. Let me ask you something. Is the dinner you had two weeks ago still nourishing you today? Is the gas you put in your car in November still running it today? Of course not! It’s a daily thing. You eat. You gas up. You drink water. For your body or your car to keep going it needs daily nourishment. That’s what fixing our eyes is! It’s about daily rehearsing the fact. It’s savoring your status as a bought person, as a one for whom Jesus has put the downpayment of his resurrection. It’s the daily reminder: I may have pimples, I may be losing my hair, I may have lost my mate or my love or my child or my dignity, but that is but a blip compared to the eternity that awaits. My place is ready not because I earned but because Jesus gives it. That’s my focus, that’s my perspective, that’s my peace.

You have peace now because you’re sure of you place then.

This whole subject has a special place for me. The photo is in our daughter’s room. 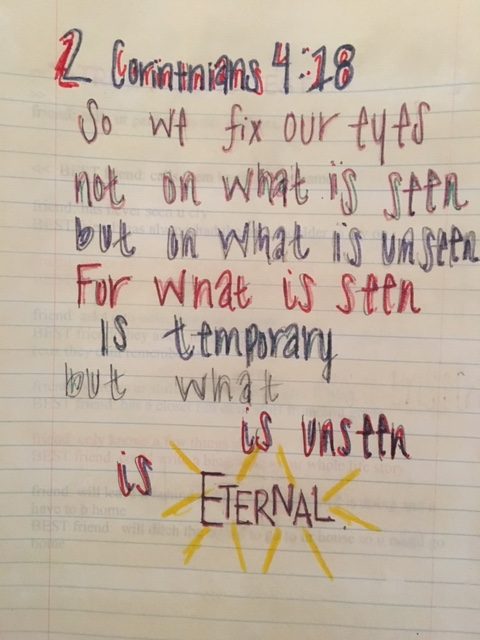 She was drawn to this verse in middle school and put it up on her bookcase. The words shaped her perspective and settled her identity. And now that she’s 30, those words remain and that truth reigns.