I’m not going to lie.

I liked yesterday’s message a lot.

I liked the set up for the sermon — a song by Don Henley & Trish Yearwood called Words Can Break Your Heart.  Don and Trisha weren’t with us in person, mind you, but their roles were filled more than capably by Chris Macedo and April Geiger.

I liked the follow up to the sermon — April Geiger leading an absolutely stunning version Lauren Daigle’s “How Can It Be.”

I liked a story I got to tell about one of my foibles as an employee of the United States Tennis Association.

I liked the bottom line, inspired by something I saw on John Piper’s Desiring God site (yes,  Methodist quoting and loving Rev. Dr. Piper.  Usually.)    In fact, we liked that bottom line so much that  we printed up & laminated cards for the congregation to pick up, post on social media, and then take with them to work.  And we gave every last one of them away.  Here’s the card and the bottom line that we found so compelling: 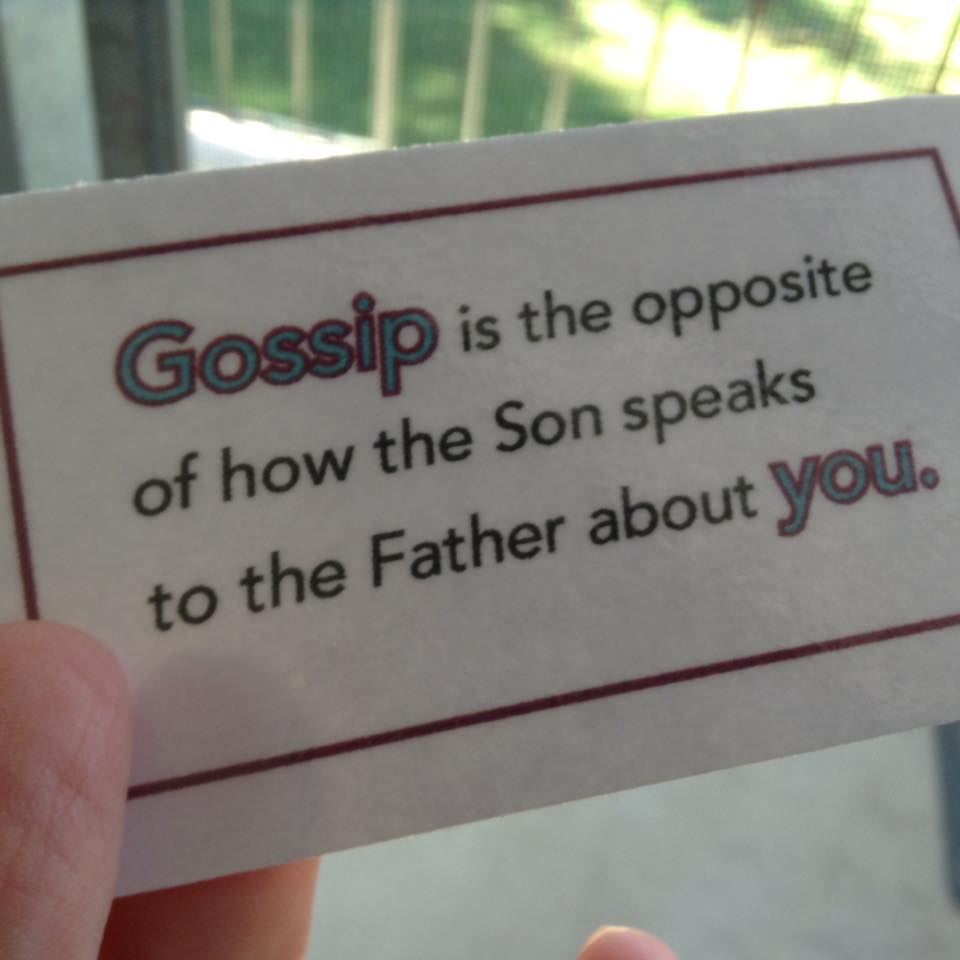 Most of us in this place don’t have to go back very far in our memory banks to remember a time when your tongues got you in trouble.  That thing you said, that confidence you shared, that off-color or slightly bigoted joke you repeated and THAT GOT HEARD by just the wrong person, that difficulty you faced when a friend heard that you’d been talking about her behind her back.  It’s just so common, the way our tongues tie us all up.

I may have told you before of the time when I was in the tennis business (after college & before seminary) and we had an eccentric boss in our office.  And I ended up sending a national mailing out without her permission, and it inadvertently had some stuff in it that she didn’t want in it, and she got in some trouble for it, and so she TOOK ME OUTSIDE THE BUILDING to . . . process?  Discuss? VENT! . . . with me.  And after going on a long venting, she closed with “And I know you’ve been talking about me.”  And I HAD.  I’d been gossiping ABOUT her & someone with whom I’d been sharing went behind my back and told her!  They gossiped about me and how I was gossiping about her!  But I was busted.  Tongue tied me up, I got written up, it was a mess.

I just know I’m not alone.  Some of you have had careers derailed, friendships ended, family scarred, all because of the wrong things getting said to the wrong people at the wrong times.  And beyond that, here’s something else I know:  many of you have been part of churches that were eaten alive from the inside out – like an infestation of termites – by gossip.  I’m not telling you anything you don’t know, just reminding you of some things you may have forgotten.  And letting you know that, speaking of church-y gossip, fewer groups dig in with such delight as Methodist preachers. About each other, our hierarchy, our churches, the whole deal.  And the assumption for most of us is that when our tongues tie us up, ESPECIALLY through gossip, then it is a HORIZONTAL situation.  We think that it is one of those sins, struggles, situations that is essentially mano a mano; we know the Lord has spoken on it, but that it’s not up to us to apply it more rigorously in our lives.

And so at this stage you will likely expect me to give a message that says essentially, “don’t gossip” at work or home or church.  After all, the pattern in the OT book of Proverbs – our Preventology guidebook – underscores that.  Take a look:

A gossip betrays a confidence, but a trustworthy person keeps a secret. (11:13)

The mouths of fools are their undoing, and their lips are a snare to their very lives. (18:7)

A perverse person stirs up conflict, and a gossip separates close friends. (16:28)

Whoever would foster love covers over an offense, but whoever repeats the matter separates close friends. (17:9)

A gossip betrays a confidence; so avoid anyone who talks too much. (20:19)

Whew!  That’s  a list!  We spend a lot of time on the more “spectacular” sins but Proverbs seems to have this one pretty high on the list.  And in the middle of a culture in which GOSSIP COLUMNISTS are celebrities, in which OK! & page 6 of the NYT are must reads, in which there is so much peddling in conjecture & innuendo, where preachers like few things more than trading in dirt-disguised-as-prayer-requests . . . Proverbs relentlessly and repeatedly warns of the folly of gossip.  And the wisdom of discretion.  Again, it seems as if this is a horizontal issue – people to people – and we’re told not to do because it’s bad and we’ll get caught.

But then, just when I think I’ve got this thing figured out – even if I am reluctant to obey completely – I saw something and put it together with some NT verses that I know and the result was that it absolutely rocked my world when it comes to gossip.  Move it from a slap on the wrist – DON’T! (until next time!) to the throne of heaven.  It pointed out the folly of looking at it from a horizontal perspective..  Look at Hebrews 7:25:

Therefore he is able to save completely[a] those who come to God through him, because he always lives to intercede for them.

Who then is the one who condemns? No one. Christ Jesus who died—more than that, who was raised to life—is at the right hand of God and is also interceding for us.

My dear children, I write this to you so that you will not sin. But if anybody does sin, we have an advocate with the Father—Jesus Christ, the Righteous One.

I love them all but the last one in particular!!  If we sin, if we mess up, if we do something we don’t want anyone else to know about!, if we’re full of shame and self-loathing, what happens?  Jesus tattles on us?  Jesus spreads the news?  It’s Jesus’ new version of the gospel?  No!  No!  We have an advocate – an attorney, arguing our case.  Pleading with the Father on our behalf.  Telling the Father what is best and right and true-est about us.  Praying for us, articulating for us, putting forth the best defense that we are not that which is done in the shadows; we are fundamentally children of the light.

It’s almost like the friend I have who when I in times of despair share that I want to leave the faith says to me in a quiet voice, “but what’s truest about you is that you don’t.  What’s alive inside you is the life of Jesus.  You’ve just temporarily covered it up with junk.”  So true!  That’s what it’s like.  That’s our Advocate!  Not spreading the worst behind our back!  Proclaiming our best on the throne of grace!  Now: F & S are equal, exactly how this happens I don’t know, I just take great comfort from knowing it DOES.  He’s not just my Lord and my Savior, he’s my Advocate when he could be my tattletale!

And when I realized that’s Jesus’ ongoing activity – the NT tells us so THREE TIMES! – then everything about gossip as a vertical issue and not a horizontal one made sense.  Because I saw this and instantly knew it to be true.  Here it is:  Gossip is the opposite of how the Son speaks to the Father about you.  Oh yes.  Jesus doesn’t trade in our dirt.  He testifies to our dignity.  That’s what he is doing for me now. As I am preaching!  And for you!  As you are listening!

And you put those kind of pieces together and realize that gossip isn’t horizontal, it’s vertical, it has everything to do with our connection to God, our ability to receive grace, and the conviction that everyone we meet is someone for whom Christ died. Gossip is the opposite of how the Son speaks to the Father about you.  It raises the stakes tremendously.

I suppose all that is why when you DO gossip, that research has shown that people associate the negative characteristics you are gossiping about WITH YOU.  Like if you are yakking about – or, better, dishing some delicious morsel of gossip out in the guise of a prayer request – about someone’s dishonesty or laziness then in the mind of the person you are sharing with (SUBCONSCIOUSLY) they think of YOU as the lazy liar.  I guess when you diminish the imago Dei of others, what gets tarnished is our own.

You know, don’t you, how talking about people is ultimately both cowardly and divisive.  Wasn’t that interesting in the Proverbs passages?  How gossip separates friends & divides brothers.  It’s as if the Proverbs author has spent time in your office, right?  In our churches, true?  I remember that time in Monroe, 20 years ago now, that some new attendees stopped coming.  They had been invited by their next door neighbor, liked what they saw, were getting plugged in, and then BOOM.  Nothing.  So I called.  (Hey – don’t even THINK of slacking off or you’ll get the dreaded Talbot call!)  And when I called, they said they’d stopped because their neighbor – the one who invited them in the first place, a woman who was SWEET AS MOLASSES TO ME! – had been talking about me.  Something about how I wanted the church to grow and liked modern music.  And this couple was like “we’ve got enough drama in our lives, we don’t need to be adding to it from church.”  Mind you, the sweet as molasses woman had never said a thing to me other than I love you, pastor; you’re just what we need, preacher.  First I’d heard of it!

And to be on the receiving end, and to see what it did to the cause of Christ, is just deadly.  It’s why nothing in gossip is merely horizontal; it’s inherently vertical, and it’s why talking about is an act of cowardice that results in division.  Ah, but talking to is an act of courage that leads to unity.  Awkward unity, but unity nonetheless.  Imagine if sweet as molasses had scheduled an in person conversation with me.  It’s awkward, it’s difficult . . . but I’m not blindsided and the church is not compromised.  In those difficult conversations where you talk TO rather than ABOUT, then you live into the reality the gossip and ITS ABSENCE it vertical, not horizontal. Gossip is the opposite of how the Son speaks to the Father about you.

Which is why the ability to restrain what you could report, to withhold what you could announce, to shut up when you could share (!) is just priceless.  Look at Proverbs 10:19:

Sin is not ended by multiplying words,

but the prudent hold their tongues

Doh!  Stop elbowing each other!  If you think this verse is about you, it is.  I love what Sam Rayburn said, “no one has a finder command of the English language than the person who keeps his mouth shut. (AV).”  If you doubt that, ask yourself:  have you gotten in more trouble for what you DID say or what you DIDN’T say?

So: what?  How?  How, concretely, can you and I translate the verticality of Gossip is the opposite of how the Son speaks to the Father about you.  into real life?  Here are a couple of down to earth, practical ideas:

Because I suppose my dream for this church and the ppl in it would be like that family who devoted every Sunday to what they called a “Sabbath For The Tongue.”  Meaning, no one could criticize anyone else in the family all day Sunday.  So they didn’t.

You know what happened?  All the neighborhood kids started coming over to the house on that day.  Because when honor replaces gossip, when dignity replaces dirty, when Jesus testifies when he could be a tattletale, everyone wants a part.