I am a great fan of Chip and Dan Heath’s Made To Stick: 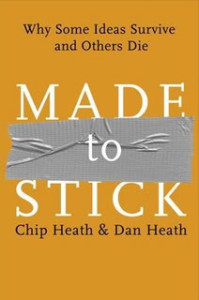 The book’s focus is corporate communication — advertising and product development primarily — but it more than applicable to the church world. In fact, I would make it required reading if I were teaching a class in preaching and/or worship.

So over the next couple of weeks, I want to highlight some of the book’s teachings and how it has impacted what we do at Good Shepherd.

The Heaths contend that effective communication is . . . .

That spells “Success” if you throw in an extra “s” at the end.

Simple. This one is perhaps my favorite. Made To Stick teaches that if you communicate three things in a given presentation, you have in effect communicated nothing. So we try to communicate one thing each Sunday. Yesterday, for example, it was your flaws are just your strengths in disguise, a truth drawn from the story of Jacob in Genesis 32:22-32. Everything we did, from music to video to message, was designed to hammer that one idea home.

I know that this simplicity works because of the number of times people repeat back to me the one point from a given service. Often several months later. Because we don’t overload people with information, what we do communicate has a freshness and an urgency about it.

Later this week, I’ll post on unexpected communication. But if I told you which day that post was coming, it wouldn’t be unexpected would it?