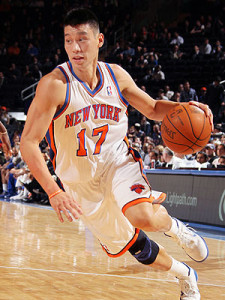 Last weekend, I was driving home when my BlackBerry buzzed with a text message from a Korean-American friend from my church: “You watching J Lin tearing it up?”

Keep up with the latest news, on the court and off, with The Times’s basketball blog.

He filled me in: “25 pts, 5 reb, 7 assists, 2 steals. Garden was going wild. Carmelo and Amar’e were going crazy. Announcers were effusive.”

A surge of emotion welled up inside me — a mix of utter astonishment, joy and pride.

“It’s a miracle,” I said to my wife, only half-joking.

“J Lin” is Jeremy Lin, the undrafted point guard from Harvard who has emerged from seemingly nowhere to become the toast of New York and Asian-Americans everywhere with his surprising star turn for the Knicks.

On Monday, I rushed home from work to find a live stream of the Knicks-Jazz game. (Time Warner, my cable provider, removed the MSG channels because of a dispute over subscriber fees.) Lin turned in another jaw-dropping performance, and did it again Wednesday in Washington. The Lakers game on Friday proved nearly too much for me to handle.

But it also represented much more than that, at least to me.

Like Lin, I’m a Harvard graduate, albeit more than a decade ahead of him, and a second-generation Chinese-American. I’m also a fellow believer, one of those every-Sunday-worshiping, try-to-read-the-Bible-and-pray types, who agreed with Lin when he said to reporters after the Jazz game, “God works in mysterious and miraculous ways.”

Being a believer can mean different things in different circles. In a lot of the ones Lin and I have traveled, it can mean, essentially, you are a bit of a weirdo, or can make you an object of scorn.

For me, as an Asian-American, the chants of “M.V.P.!” raining down on Lin at the Garden embody a surreal, Jackie Robinson-like moment. Just as meaningful to me as a Christian, however, is the way the broadcasters have hailed Lin as not just the “Harvard hero” but the “humble Harvard grad.” His teammates appear just as overjoyed at his success as he was. Both seem to be testaments to his character.

Some have predicted that Lin, because of his faith, will become the Taiwanese Tebow, a reference to Denver Broncos quarterback Tim Tebow, whose outspokenness about his evangelical Christian beliefs has made him extraordinarily popular in some circles and venomously disliked in others. But my gut tells me that Lin will not wind up like Tebow, mainly because Lin’s persona is so strikingly different. From talking to people who knew him through the Harvard-Radcliffe Asian American Christian Fellowship, and watching his interviews, I have the sense that his is a quieter, potentially less polarizing but no less devout style of faith.

An Asian-American Christian? What’s that?

Many in this country have probably never even heard of this subcategory on the religious spectrum. But if you are a relatively recent graduate of the Ivy League or another top-tier college, you will probably recognize the species.

Harvard’s Asian American Christian Fellowship, which started in the 1990s, is one of the most active student groups on campus. You will also immediately know it if you are part of a historically orthodox church in a major metropolitan center like New York, San Francisco, Chicago, Boston or Los Angeles because your pews are probably filled with them. Like Lin, many Asian-American Christians have deep personal faith, but they are also, notably, almost never culture warriors. That is simply not what is emphasized in their churches and college Christian fellowships, including the one that played such a formative role in Lin’s life at Harvard.

In trying to explain why my Twitter and Facebook streams in the last week have become overrun with postings on Lin, I have struggled to convey to my friends the sense of connection. But it boils down to a welter of emotions from finally having someone I can relate to enter the public consciousness.

The last time I felt anything resembling this was Yao Ming’s first season for the Rockets. I experienced a similar mix of pinch-me-am-I-dreaming befuddlement and chest-thumping pride when I traveled to Houston to do an article on him and heard an arena crowd singing his name, on Chinese New Year, no less. And, yes, I followed Tebow’s extraordinary ride this season, in part because of his faith. More than anything, though, I found the fierce emotions he incited on both sides of the religious divide depressing.

The feelings the Lin phenomenon instill in me are orders of magnitude greater because he is an Asian-American, like me, whose parents were immigrants to this country, like mine. He grew up, like me, in the United States, speaking English; his Chinese, like mine, could use improvement. He went to my alma mater. And, yes, he is a Christian, too, but with a brand of faith, shaped by his background, that I can relate to much better than many I have seen in the public arena.

I first started following Lin closely in late 2009, when he was a senior and Harvard nearly pulled off an upset of Connecticut. Lin scored 30 points, and profiles of the Ivy League phenom began popping up regularly on Web sites.

I read that Jeremy’s father, Gie-Ming Lin, attended graduate school at Purdue and studied computer engineering but loved basketball and took his son to the local Y.M.C.A. to shoot hoops. It reminded me of my dad, who also came to the United States for graduate school in electrical engineering, and took my brother and me to the gym when we were young.

I read, too, that Lin endured racial taunts on the court, which brought me back to my middle school and high school years, hearing the same epithets, but on the soccer field.

I also read about his personal faith and the way he helped lead a small group for his Christian fellowship, harking back to the way I became a Christian in college, in part through some of these same small groups, in which we often wrestled with difficult questions deep into the night.

I like to think of my approach to faith as nuanced and not fitting easily into anyone’s standard boxes. I suspect Lin’s has to be as well.

Last season, I followed closely as Lin went undrafted but later signed with the Golden State Warriors. He played sparingly and was cut in December. He landed briefly in Houston but was cut again. Finally, he joined the Knicks but had mostly sat on the bench. Now he is suddenly the shining star of New York.

In the midst of his stellar run last week, I couldn’t help but reflect on Lin’s journey. A Bible verse that he has cited as a favorite came to mind, encouraging believers that “suffering produces character, and character produces hope, and hope does not disappoint us.”