So many interesting things happened yesterday that I just want to offer a few observations about them.

It really was a head-spinning, mind-blowing, and even face-melting kind of day at Good Shepherd.  We pray that in addition to being head-spinning, it was also God-honoring.

You can watch the service in its entirety here.

* We opened with an instrumental Call To Worship that included an extraordinary guitar solo (Chris Macedo described it as “face melting”) by a GSUMC “lifer” who is home this week on Christmas break from his college.  Yet what I liked even more about the piece was the background riff our rhythm guitarist played.  Why?  It was borrowed liberally from Led Zeppelin’s Kashmir.  I kept hearing the vocals in my mind:  “Oh let the sun beat down upon my face, the stars to fill my dream . . . “

* An 80 voice children’s choir led us in praise & worship. 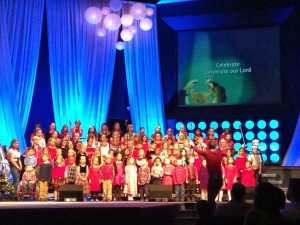 It wasn’t a children’s musical.

It wasn’t a kids cantata.

It wasn’t a program for which you had to come back to the church at a later time.

Nope.  It was a worship leading choir.  Why was that so important to us?  1) If something is worth doing, it’s worth doing on a Sunday morning; and 2) children need to know that they too are part of inviting all people into a living relationship with Jesus Christ.  They weren’t there to entertain us or to make us smile. They were there to invite us into the presence of God through song.  And whether they were singing an updated Away In A Manger or an energetic Our God, they did just that.  Our Children’s Team and Music Team worked together in such a way that the logistics of moving 80 kids on and off our platform three times AND delivering them all to their parents went seamlessly.  Of course, the more effortless it looks, the more effort it took.

* The message, which continued the Wildest Dreams series, was called Dream Come True.  Some of the most memorable language in the sermon was inspired by Andy Stanley who first coined the term “mistakers.”  I went on from there to explain — based on Matthew 1:18-23 — that we are not mistakers who need correcting; we are sinners who need saving.  The message also communicated that the names “Jesus” and “Immanuel” form the perfect intersection of God’s idenity with his activity.  In Christ he is “God with us” (identity) and “the Lord saves” (activity).

* The message also connected the Christian message with the recovery community: admitting the awful truth about ourselves — that we are sinners and not merely mistakers — is similar to alcoholics “admitting that we were powerless over alcohol.”  Admission is the first step to sobriety.  In the case of the Gospel, admission is the first step to deliverance & forgiveness.  In other words, when you acknowledge the worst about you, you receive the best about God.

* The message culminated with an invitation to salvation.  Not a time to mull it over and come back later.  Not even a time to raise a hand in near anonymity while everyone in the room has their eyes closed.  Instead, we asked people who wanted to give Jesus their lives to stand up when I said the words “Jesus Is Lord.”  It’s an invitation method I’ve only learned in the last couple of years, and God has clearly been blessing it.  Dozens of people stood at all three services and we gave away all the Grace Bags we had prepared.  All the standing, coming forward, praying, and celebrating was chaotic, exhausting, imperfect . . . and ultimately thrilling. Most memorable for me was a 16 year old young man — whom I remember as a toddler when I first arrived at GSUMC — who drove himself to church that morning.  As soon as I saw him before the 11:30 service, realized he had driven himself there, I knew: “he’ll become a Christian today by standing at the end.”  And he did.  Hallellujah.