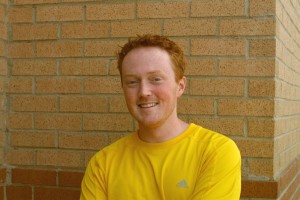 The man in this picture is James-Michael Smith, who has been the Disicpleship Pastor at Good Shepherd since 2004.

Today is his last day on the job.

Thankfully, it’s not his last day as part of the Good Shepherd community.

James-Michael is moving on from the staff so that he can prepare for and then pursue his Ph.D. in biblical theology. We hope that one day he’ll be teaching in one of our United Methodist seminaries.

James-Michael arrived in Charlotte back in 2003 and moved in to a townhouse across the street from the church. As he studied for his MDiv. degree at Gordon-Conwell’s Charlotte campus, he became involved in the life of our church. When the Discipleship position came open a year later, he was a natural for the job.

He leaves behind a Pathfinder approach to small group life that we all love here. His second legacy is the Passage School Of Theology, a collection of high-level, content-heavy classes that we now offer.

And no one taught those classes better than James-Michael himself.

As a farewell, we made a surprise DVD for him consisting of students in front of the camera telling what they’d learned under his teaching. His influence and reach have been enormous.

He’s helped us in our goal not just to be a large church but a deep one as well.

Plus, he’s passionate, sarcastic, quick-witted, and committed. All the things I like. I’ll miss him around here on a daily basis.