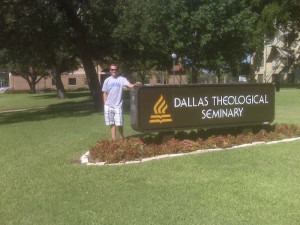 Julie and I spent this past weekend in Dallas celebrating my nephew’s wedding. As a lot of you know, I was born and raised there, living in the same house from birth until I went away to college at 18.

Anyway, while we tooled around town visiting a lot of familiar haunts, we made a trip to a place I had never seen before: Dallas Theological Seminary, a large, non-denominational, evangelical school located on the outskirts of downtown.

DTS trained three of the most influential pastors in the US — Chuck Swindoll, Andy Stanley, and David Jeremiah. In addition, several pastors who have been significant in my own spiritual journey did their theological work there.

Yet I’d never laid my eyes on the place.

It’s in a different part of town than I grew up in, we Methodists run in different seminary circles than the independents, and I never made the trip until now.

It’s not a beautiful school by any stretch — the campus is mostly concrete and pale brick — just an influential one.

And while I agree with much of “Dallas theology” when it comes to the middle of the bible, I am in a far different place on either end of it — I am neither a young earth creationist nor a Rapture Ready dispensationalist.

So I’m forever grateful for my own time at Asbury Seminary.

All while leaving my hometown with a first-hand appreciation for the on-going influence of the seminary that bears its name.