“I Pity The Fool” Launches — The “Dumb And Smarter” Sermon Rewind

So we are pitying fools this month at GS and as I have thought about all that and our relationship with FOOLERY (and his cousin Tom), I realize it is not static. Almost none of us are ALL ONE or ALL THE OTHER – like we’re not 100% foolish or 100% wise. You know this. That’s why I have three categories up here with signs to back them up.

First there’s WERE FOOLISH. So this is like that time you drove through a McDonald’s drive through backwards (no, they don’t serve). It’s the times you look back on with this mixture of nostalgia, humor, and regret, and maybe more regret and you can say with confidence “Yep! Was a fool!” Then there’s ARE FOOLISH. This is the kind of sickening realization that you shouldn’t have started that relationship or padded that expense account or said that thing about your boss in public or even clicked on that website. It’s a fix you’re in now and you can look in the mirror and say with confidence, “Yep, I’m pretty foolish.” Get this: others of you are here right now … and you have no idea. You likely think it’s someone else’s fault.

And then there’s ?. Leaving it with a ? because what will you be in the future, the future that starts today? See we’ve all been at Door #1, some are parked at Door #2, but Door #3 is TBD!! 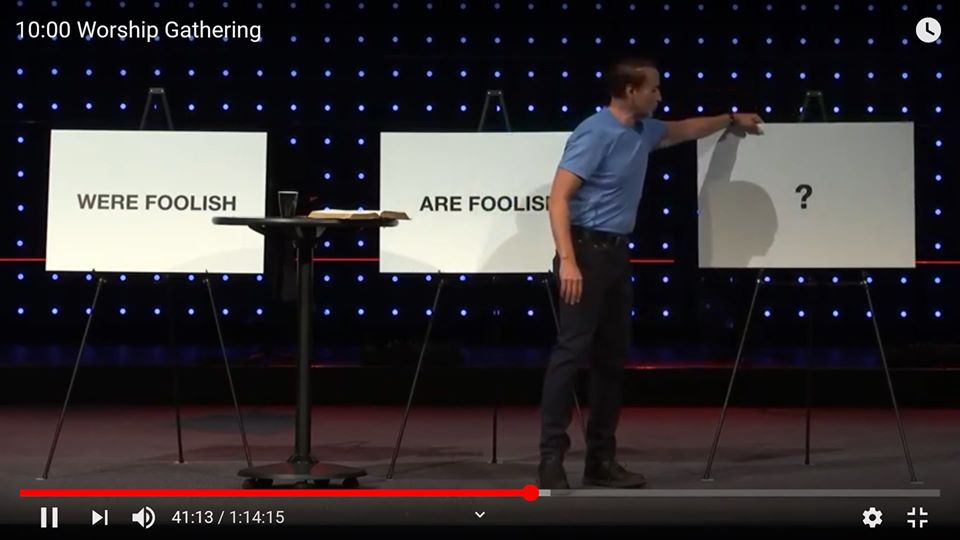 And for all of you evaluating not only how you got where you are with your relationships and with your money and even with your emotional health, I’ve got some great news. Ready? Your foolery is not your destiny!! Just because you’ve BEEN HERE (some of you have become comfortable here) does not mean that is where you will stay! Because my great dream for the people of this church is that we’d glean so much from pitying fools that we would stop being them. And the further great news as we launch this series is that it is both way easier and MUCH HARDER than you thought! Isn’t awesome?!

And that confidence comes from the signature verse of Proverbs, the theme setter of the whole deal, Proverbs 1:7: READ. This one has a special place for me because when I went away to college, surrounded by super smart people like my freshman year roommate who got 800 on his math SAT, my sister had framed this verse and I put it on my desk every night when I studied. It as a filter, which I’ll come back to later. And as it sets the stage and theme for everything else in this book, it’s kind of breathtaking for what it says. But can we look at the end first?

You know what it’s like? It’s like when I was leaving the Y awhile ago and in the parking lot I saw a mom and her two year old daughter get out of their minivan (of course). And as they were walking across the parking lot, mom tries to grab the hand of daughter – because a parking lot is where 2000 pound cars can crush 2 year old daughters! – to guide her to safety. And daughter is like NO! She stomps away AND puts her hands across her chest like this. I WILL NOT BE GUIDED. I WILL NOT BE RESTRAINED! I WILL NOT FOLLOW BECAUSE I KNOW BEST!

And that’s what it’s like. We’re the two year old, so self absorbed, so unaware of dangers all around us and as God guides through the minefield of life we’re like DON’T INSULT ME! THAT IS SO OFFENSIVE! YOU CAN’T TELL ME WHAT TO DO! I DESPISE THE GUIDANCE … AND THE GUIDER. And so we follow our own path, not willing to learn from the paths of others, right into our own destruction. It’s true with how we use our tongues, how we handle our money, how we manage relationships, even how we talk to ourselves.

And I think I know why. For some of them – for those of us here in the ARE FOOLISH stage – it’s because the alternative takes time. It’s not SNAP and we’re wise. Plus, even that word “wisdom” … it’s so obviously OLD. And since wisdom is OLD and growing in takes time and so many of us believe that newer is better and younger is smarter, we never even start. Fools like it now; the wise like it best. Fools get wrapped up in what’s urgent; the wise take what’s ultimate. Fools lack patience and the wise love it. Acting foolishly and making foolish decisions is generally both easier and quicker and therefore so many of us never even start the process of its opposite.

Is that you? Are you realizing that when it comes to God’s guidance in this life and into the next, you’re like the two year old with hands across your chest? Do you hate what ultimately gives life because it means you’d give up control? You might have to admit that people who aren’t as cool as you are actually smarter than you?

If so, it’s likely time to go to the other side of Proverbs 1:7, the beginning of the beginning. Check it out: The fear of the Lord is the beginning of knowledge. Oh, don’t get riled up over “fear” – fear is really the move from rebellious to teachable. From hands across chest to wide open, ready to receive. With the awed reverence that God COULD BE FURIOUS AND COULD CAST ME INTO HELL but chooses not to. Really: he is not in my image (not matter how much I believe in the god of my understanding) but I am in his. But look at what it says: that posture (fear) is the beginning of knowledge. You know what stuns me. We begin with surrender to the one who did not. Did you know that? God never began. He always was! I can’t wrap my mind around it … thank God! If I could he wouldn’t be a very good God! He is the uncreated, unbegun one, not me.

And realizing that, recognizing that, makes fearing him this marvelous filter for all kinds of knowledge and information that comes our way. Remember me using this verse in college? See, I was surrounded by people who were so smart about the world and didn’t know a thing about God – and that kind of smarts is so seductive! Beginning your search for being wise instead of foolish with the one who did not begin (!) … is such a filter.

Because some of you have no filter for what comes into your minds. Things that seem smart or trendy or cool are really, when you begin with the one who did not (!), just plain silly. Like you know what the smart people are the smart campuses are doing these days? Introducing themselves and telling you what pronouns to use. Talbot: He/Him/His. Julie: She/Her/Hers. If you’re not sure: They/Them/Theirs. As if it’s not obvious; as if it’s not silly masquerading as sophisticated. And you know what else? God created gender (Matt 19) and it’s good. It’s beautiful. Why be foolish when you can be eternally wise and affirm that? What a filter.

Because get this: fearing God (and so filling this ? with wisdom!) is ultimately a posture, a teachable spirit, a perspective that says to God, “there is so much about you that I want to know. “And I can never learn it all! The more I know and learn, the more whole I will become with relationships, tongue, money, and emotional health. And you never run out of stuff to show me!” You never stop sitting as his feet learning his character and his ways and having your own mind and heart re-shaped and delivered in the process. Here’s what it all means, both halves of Proverbs 1:7: Fools never start what the wise never stop. Right! Fools never start the process of growing in knowledge and character and wisdom because it takes too long and costs too much. Wise never stop because the blessings never run out.   Fools never start what the wise never stop.

You know how this works with me? You know the whole bible lifting thing? The “not book, is library” that will probably be on my marker? I’ve been doing that 10-15 years, max. Which means I’d already been at ministry for close to 20 years. But I was reading BIBLE VERSES without really reading THE BIBLE. And then with people like JMS (AV) and Chris Thayer (AV) – much YOUNGER MEN who connected with our church family, btw – I realized I was missing out on so much. And that time at least I didn’t despise what they were selling. So my foolery wasn’t my destiny & I started a new season of  Fools never start what the wise never stop.

Or people here, LG leaders usually, when they tell me about a new study their group is doing, you know how they do it? Almost without fail? Whether video or print? With a BIG SMILE. Every time, whether it’s a Young Adult LG leader for young couples in the BMM or an 80 year old sage pouring into women of all ages.  Fools never start what the wise never stop.

So: this is not just book learning. Especially for those of you who learn and grow better by hearing or seeing than reading. It is instead an attitude in life that says: my arrogance is the enemy of my intelligence. There are people not nearly as cool as me who are still much smarter than me. I might have a learning style that learns by making a sandwich at the CRM or hammering a nail on a mission trip, but whatever, however, I want the beauty of God and the goodness of God and the joy of God to be my filter and my guide!

And here’s the thing: the payoff for this? Whether you gain knowledge in reading, in groups, or by doing? They payoff is crockpot not microwave. It’s after the investment of time and energy and posture, not before. That’s why fools DESPISE it! If they can’t have it now, they don’t want it at all! But for the wise … like if you’re a runner, you may know of something called a runner’s high. Tell me: does that come before or after you run? (Pause!) Or if you work out, does the euphoria come before or after you lift? Or do you celebrate that baby before or after labor? Duh! Gratification delayed is gratification multiplied!  Fools never start what the wise never stop.

There was a 70 year old man who was in my office with his 69 year old fiancé. And we set the date for the nuptials and they asked what’s next and I kind of hemmed and hawed because I wasn’t sure of pre-marital counseling with people who … you know, had lived a life or two. So I told them that given their “stage of life” we probably didn’t need much premarital work, unlike younger couples. And the man said, “Anyone who is too old to get help is too old.” (And I told him THAT WILL PREACH! … and now it has!) That’s what it’s like. REFRAIN