That’s right.  On a Wednesday night and not on a Sunday morning.  Here’s what it looked like . . . 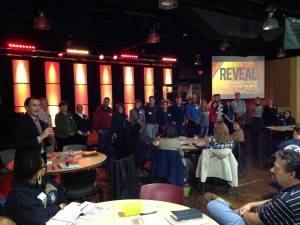 We wanted to give people a tangible way to respond to the first message in Not A Fan, an October 13 sermon that explained how Jesus doesn’t want you to admire him.  He wants you to pursue him.

And we hit on a great way for people to pursue:  Reveal, a six week “Bible for the rest of us” class led by master teacher & Good Shepherd member James-Michael Smith.  So over seventy people signed up on that Sunday and have been spending their Wednesday nights sitting under James-Michael’s teaching ever since.  I blogged about the launched here.

The challenge came with the church calendar.  I hadn’t offered a Next Step membership class since August, we kept getting requests about “joining,” and yet we didn’t want to clutter up people’s schedule with one more obligation.  Nor did we want to take the focus off of Reveal.

So we decided:  since people are digging deep for six Wednesdays into the library we call the bible, isn’t that a pretty good indication of their commitment to a living relationship with Jesus Christ?

We may have to circle back around to some of those Methodist essentials like the appointment system, our Social Principles, & paying apportionments — though let’s remember that when the thief on the cross asked Jesus to “remember me in your kingdom” the Lord did not ask in return, “did you pay your full apportionment?”

So eighteen people (who had completed their membership packet and signed a membership covenant) stood up last night and answered these questions in the affirmative:

Do you declare that Jesus is your Lord and Savior?

Do you desire to pursue a living relationship with Jesus Christ?

Will you be loyal to Good Shepherd United Methodist Church and support it with your prayers, presence, gifts, and service?

On a Wednesday and not a Sunday.  In a large LifeGroup and not in a Worship Gathering.