I Am A Traditionalist

I learned this weekend what people who prefer traditional worship over contemporary and post-modern worship feel like.

And it was tennis that taught me that lesson.

Yesterday featured what many experts are calling one of the greatest, if not the greatest, tennis match of all time: Novak Djokovic’s epic 5 hour, 53 minute victory over Rafael Nadal in the final of the Australian Open. 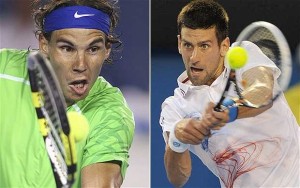 The match was simply brutal: mesmerizing rallies, impossible retrieves, bold aggression, and dramatic turns of momentum. The match was so good, in fact, that ESPN 2 played it twice again on Sunday, dubbing it an “Instant Classic.”

And I could barely watch it.

(Now . . . I couldn’t watch it live as Sunday night in Australia is Sunday morning in the U.S. and I’m otherwise occupied at that time.)

But the little bit I did watch live and then attempts to watch the replay didn’t really grab my attention the way an instant classic should.

Why not? (And this is how it relates to traditional worship . . . )

Because it’s not tennis the way I learned it or the way I remember it or even the way I enjoy it.

Now: these guys are better than players of yesterday. They’re bigger, fitter, and, taking advantage of the improvements in technology, they hit the ball harder and with more spin than the Lavers, Ashes, and McEnroes of my childhood could even dream of. Like I said, their game is brutal.

But in my mind, the beauty is missing. There’s no coming to the net. No serve & volley. No passing shots. Today’s points are longer, to be sure, but less interesting. In the way my mind is conditioned, nothing is more beautiful than a spinning serve followed by a putaway volley, a la John McEnroe in his prime.

Today’s game is bigger, bolder, and better . . . but I’m not comfortable with it.

Which brings me back to worship style. All the largest churches in the U.S. (check here and here) are contemporary with barely a nod to the kind of traditional worship that dominated in the early part of the 20th century. Those churches are bigger and bolder, for sure, and “better” at attracting large crowds than congregations which feature robes, organs, and hymnals.

Yet for people who have memories steeped in a worship style from that earlier era, no argument from boldness or effectiveness will ever do. There is a gap in comfort and aesthetics that simply can’t be bridged.

Of course, we at Good Shepherd have from the outset been a “contemporary” church with a commitment to “classic moments” in worship.

But after this weekend, I understand better than ever why that style won’t appeal to everyone.

Because some people just prefer tradition. In a different setting, that includes me.