For my 12th birthday, my father sprung one of his best surprises ever on me and bought me Paul Simon’s There Goes Rhymin’ Simon. 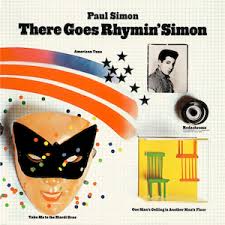 The summer before that birthday, he and I had driven from Dallas, Texas to Knoxville, Tennessee for a tennis tournament (the National Boys’ 12 and under, if you must know) and he noticed that I became delirious every time Kodachrome came on the radio.

As with most albums, I discovered in the listening that the “hit” was hardly the only good song.  Loves Me Like A Rock and American Tune added to the overall joy of the record.

Fast forward 42 years.  Julie and I bought Riley a record player (yes!) for his 23rd birthday, I pulled out the old vinyl Paul Simon, and began listening all over again.  Then I realized I could listen a lot easier if I just bought the CD — which, on Amazon takes two clicks — and there you have.

While driving around Charlotte and then up to Lake Junaluska for a Saturday wedding, it was 1973 all over again, and Paul Simon was my guide.

And in addition to Kodachrome, Loves Me Like A Rock, and American Tune, the ode to apartment living One Man’s Ceiling Is Another Man’s Floor makes this album a keeper regardless of its age.  Or mine.