How To Tell A Mountain From A Molehill, Week 4 — The “Finders Losers” Sermon Rewind 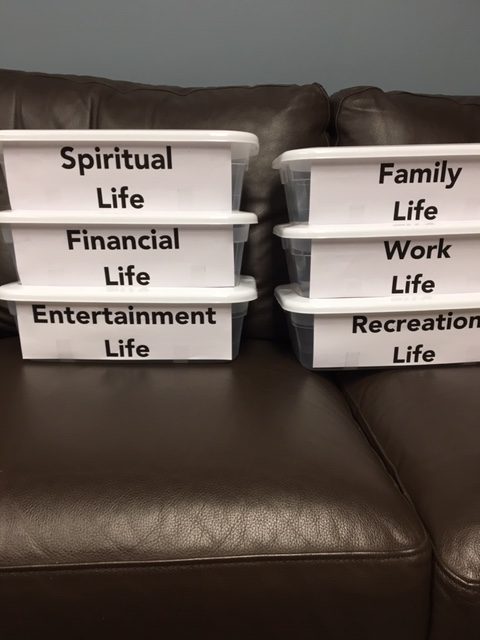 44 “The kingdom of heaven is like treasure hidden in a field. When a man found it, he hid it again, and then in his joy went and sold all he had and bought that field.

45 “Again, the kingdom of heaven is like a merchant looking for fine pearls. 46 When he found one of great value, he went away and sold everything he had and bought it.

So I’ve got my plastic little compartments here.  It’s sort of the way we approach life, isn’t it?

And here’s my FAMILY LIFE, which, if you’re an empty nester, is a lot different from what is like 15 years or so.

And here’s my RECREATION LIFE.

And here’s my SPIRITUAL LIFE.

And here’s my FINANCIAL LIFE.

And into that sort of natural way of making sense of life, Jesus comes in.  This little couplet of parable-ettes are so interesting.  They’re interesting on the one hand because people through the years have focused on the comparison Jesus draws – the kingdom of heaven is LIKE, meaning, I am the King & here’s what happens in a decisive encounter with me, risen & reigning – on the NOUNS in the story.  Meaning: is the kingdom like the guy plowing?  Is it the treasure he found?  Is it like the merchant?  Or the pearl HE found?  And I’ve come to realize that all that NOUN-CENTERED CONJECTURING misses the mark.  He’s not saying that a living relationship with me is like the NOUNS; he is saying it’s like the VERBS.  The action!  The finding, the selling, the buying! The Discovering, the abandoning, the embracing.  The surprise, the recklessness, the joy.  Because that’s what the two stories have in common, that’s why Jesus tells them one right after another and that’s why Matthew arranges them this way.  And the selling (verb!) hinges on two special words: “all” in 13:44 and then “everything” in 13:46.

The two men find something totally unexpected – a generic treasure and a very specific pearl – and both realize that this ONE NEW THING requires EVERYTHING.  So they sell ALL, EVERYTHING – not as an act of generosity to give to the poor! But as an act of extreme selfishness that knows it can’t let the new thing get away! – to have that one things.  The nouns here only matter a little bit – molehills! – while the verbs matter a lot – mnts!  All, everything.

And just so you know, the SECOND guy, the merchant, he would have been a pretty shady character in the days that Jesus told the story.  The word we read as “merchant” was originally Emporos, which, AWESOMELY!, is where we get the word emporium.  (AV)  And all of a sudden it sounds much more like a Flea Market than Fine Jewelry.  Which is the kind of work the merchant.  He made money by moving money rather than by making things or producing products, so in the ancient mind he was both shady and sketchy.  So a story with that kind of guy in any kind of heroic role is a bit unexpected.  Jesus starts out the story at 1st & 15 (or behind in the count or hitting a second serve while down a break point!).  And then note 13:45 again: READ.  Not diving for pearls. Searching for them.  Meaning he was trying to buy an assortment of pearls (unlike the plowman who wasn’t looking for anything; he just found it).

So our shady hero, while looking for some pearls to sell at his flea market, while depending on OTHER folks to do the dangerous job of pearl diving, he finds not a pearl but THE pearl.  The essence of pearl-ness. Is it just big?  Or perfect?  Or bigly perfect?  We don’t know all we know is his reaction: he sells all that he has NOT TO GIVE IT TO THE POOR but to keep the proceeds so he can buy his pearl!  That’s what he does.  You know what that means?  He is no longer a merchant.  (No more merchandise!)  He’s a collector.  He’s no longer a capitalist; more like a philanthropist! Once he found the Noun, the verbs he did fundamentally changed his identity.  All, everything.

So where does this anti-hero leave us?  Is he the parallel to the kingdom?  Is he the role model for those of us who, when we die, want to leave the realm of earth and enter the kingdom of heaven?  Is the pearl the main actor in the story?  Guess what?  It’s those two connector words – all & everything — where he trades one identity in for another, here’s the conclusion:  If Jesus isn’t Lord OF e verything, he’s not Lord of anything. That’s why Jesus tells these pile on stories.  Because most of us, who are so good at compartmentalizing life – this is my work life, this is my home life, this is my recreation life, here is my spiritual life, this is my spouse, here is my fling … we fit life into compartments.  Jesus says NO to all that.  If I’m not Lord of the whole thing, I’m not Lord of anything.  If Jesus isn’t Lord OF e verything, he’s not Lord of anything.

It’s like those Xns sent as missionaries to an island nation well known for its cannibal tribes.  And as they prepared to enter the wild in order to search for people with whom they could share the gospel, their advisors said, “Don’t do it! You could lose your lives!”  To which they answered, “We died before we came here.”  Died to old self, old life, things, alive to Christ who lives in them.  If Jesus isn’t Lord OF e verything, he’s not Lord of anything.

Or it’s even like the YA in our community whose mom died of cancer awhile back.  Many prayers went unanswered and much faith went unrewarded.  Yet a few months after saying good bye to mom, the surviving daughter gave this testimony to our church.  It was so good I wanted to read it for you: (check end for text).

After my mom died a song became popular that really stopped me in my tracks. Well a modern version of a very old song that really ministered to me in the after period of grief and confusion. “Through it all, through it all, my eyes are on you.” Some people have a hard time saying “it is well” after that because things aren’t well with them. Their life is in shambles. They may felt like a hypocrite singing that line. I felt like a hypocrite saying that line sometimes. But then I was reminded that saying “it is well with me” doesn’t mean I’m saying my life is great right now. It’s saying I’m content in my soul because I cling to the promises God made and the truths I know about him and His nature. His faithfulness. His goodness. His love. His mercy. And I praise him for those things. Because through it all, and even despite of everything going on at my life at the time, He IS good. He IS faithful. He DOES love me. He is merciful.

If Jesus isn’t Lord OF e verything, he’s not Lord of anything.

That’s not cliché.  It’s not wish upon a star.  It’s recognition that life is messy and hard and if you get distracted and base your life and divide your life into segments and live by your compartments, your very segmenting will let you down.  Only one thing won’t – the life, death, resurrection, and return of Jesus.  So many of you have fallen for the lie that your contentment is connected to your circumstances.  It’s not.      If Jesus isn’t Lord OF e verything, he’s not Lord of anything.

Now: I know some of you aren’t with Jesus yet and this sounds so comprehensive. That’s OK.  I don’t want to give you a bait and switch and tell you following Jesus is something that it’s not.  I say that because a lot of folks have been sold a bill of goods — that you can add Jesus to life.  That he is an accessory.  Nope.  Jesus doesn’t want to be the spice of life; he is the substance of life.  If you’re not with Jesus yet, I want you to know what’s real … and that you’ll never be more free than through total surrender.

There something great about these two stories in Matthew 13: they’re told to INSIDERS.  Look at 13:36:READ.  It’s like he is saying to his posse, “Don’t let your familiarity with the story and with me dull you to its wonder and significance.  You may know more than most but that can be dangerous because you can value it the least.  Familiarity breeds apathy. Don’t let that happen, insiders.”  Staff: same with you.  Preachers:  same with you.  Long timers:  same with you.  Even you veterans!  The most important thing in your life is not that prize you won; it is that the Prize won you!  When Jesus ransomed you and then resurrected in you!  Stop trying to get your identity from the applause of the crowd when you already have the approval of the king!  When you have the one thing, you’re freed from basing your life and defining yourself on the many things.  If Jesus isn’t Lord OF e verything, he’s not Lord of anything.

So I have to ask. If the merchant is no longer a merchant because he had found the one thing, what are you no longer?  If the comprehensiveness of Jesus’ Lordship changed him from capitalist to collector.  You find or get found by the One who is the One Thing of surpassing value and how has that changed your identity? What are you no longer?

What is it? Where is it?

Like the guy who told me:  I can’t believe I wasted all that time running from God.  Now that I’m at this church, I’m not who I was.  Thank God.

And neither are you. If Jesus isn’t Lord OF everything, he’s not Lord of anything.