How Something I Never Thought Would Happen Happened 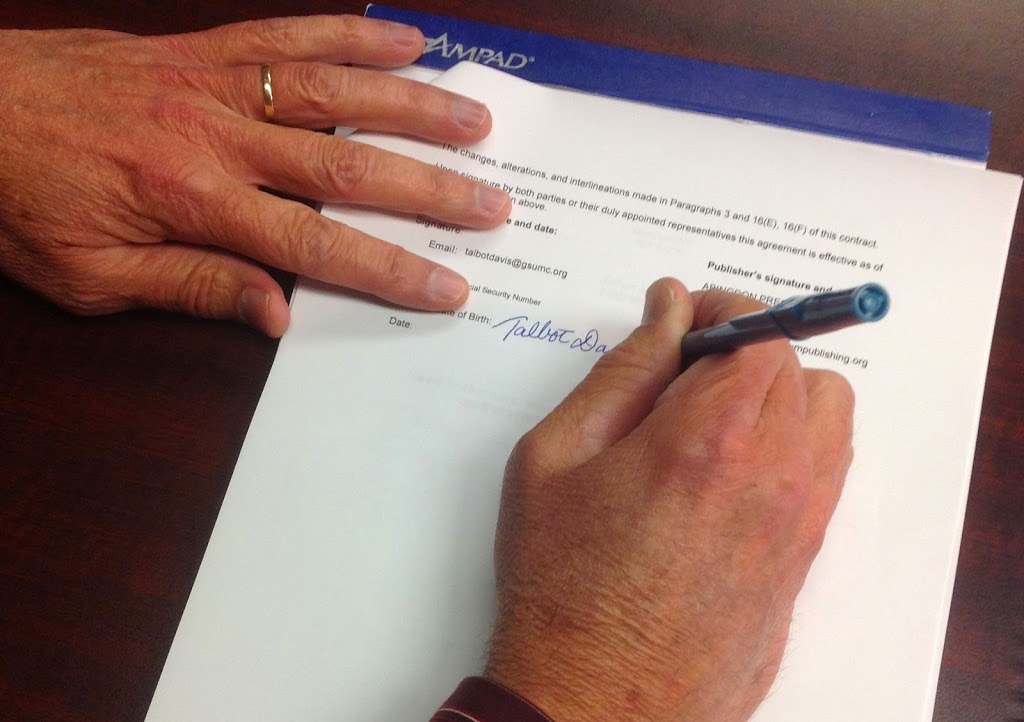 That’s me, signing a contract with Abingdon Press to publish a book of mine to be called Head Scratchers.

I’m sort of scratching my head at all this myself.

Here’s the backstory.  For a couple of years, I have had several people in my life telling me that some of the sermon series at Good Shepherd should be published in book form.  The thinking was that those sermons could work as small group curricula and could help fellow preachers looking for ways to grow in sermon design and delivery.  Part of me wanted to believe those people, part of me was skeptical, and part of me had no idea how to make it happen anyway.

Then, as some of you remember, we did The Storm Before The Calm in the summer of 2013 at Good Shepherd.  I knew the content was good, the graphics were beautiful, and the topics were compelling. So with the help of my friend James-Michael Smith, I turned it into an e-book.

Then, to help promote that e-book, a friend from church gave me some lessons on social media and the next thing you knew, there I was with a Facebook page (www.facebook.com/talbotdavis) and a Twitter handle (@talbotdavis).

Then, a grad school friend who works with a publishing company told me on a couple of occasions that he and his team liked The Storm and might be interested in publishing it in book form.

Well, in response to that possibility, I got several people praying.  I still thought the chances were remote and so I didn’t want to set myself up for failure by getting a large group out there praying; instead, I limited it to about seven people who seemed to have an interest.  “Would you pray that somehow, someway a publisher would be interested in this material and these sermons could get out there?”

So pray they did.

And then we did The Shadow Of A Doubt earlier this year, which people again told me was worthy of publication.  One friend offered to help underwrite a publishing venture.  So my longing increased.

And then my grad school-connected publishing friend talked to me about some other possibilities, but let me know that his group wasn’t quite geared up to publish a sermon series in book form.  It was both encouraging and sobering at the same time.

But still those friends were praying.

And then in early August, out of nowhere and completely unsolicited and unexpected, I got an email from an editor at Abingdon Press (an imprint of the United Methodist Publishing House) who said that he had seen the Head Scratchers sermon series online (preached in June of 2014), liked it a lot, and asked if I would be interested in them publishing it as a book and study guide for use by small groups.

By the way, part of what attracted my new-editor-friend to the Head Scratchers series was the collection of weekly sermon bumpers by Chris Macedo and team:

The Abingdon editor then navigated Head Scratchers through the approval process within the publishing house, giving me periodic email updates, and while I was waiting, what did I do?  Asked those same people to pray, of course.

I got the final confirmation a couple of weeks ago and then received the contract late last week.

The Head Scratchers book will be released sometime during the summer of 2015.

And all the time, I’ve been thinking: “Head Scratchers?  Abingdon? It was supposed to be The Storm Before The Calm or The Shadow Of A Doubt and with someone else!”

But through it all, God has been saying, “You get a group of people praying for the same thing at the same time and leave the details of how it gets answered up to me.”

Lesson learned.  And celebrated.  And even signed, sealed, and delivered.