How A Preacher Spends A Sunday Off

Yesterday came at the tail end of a vacation week for me, and so offered the rarest of opportunities:  a Sunday morning in which I was both off work and in town.

So how did I spend it?  I went to church.  Twice.  At two very different congregations.

In deciding where to attend, I had a couple of criteria:  1) it had to be far enough away from Steele Creek that I could be anonymous — and, hopefully, NOT encounter anyone who used to attend Good Shepherd; and 2) I had to have heard some good things about the church.

So I began the morning by driving 30 miles or so up to Mooresville, NC, to attend the main campus of The Cove Church, a multi-site, multi-media congregation of about 4,000 worshippers per weekend.

I arrived early, and immediately noticed that what we play for “gathering music” inside the Worship Center only, the Cove plays on speaker systems that line the walkway to the church.  Nice touch.  The same music dominates the lobby and even the bathrooms, and gives an unmistakably upbeat, positive vibe to the early stages of a guest’s experience.

The other dominant early impression is that The Cove is a coffee-centric church.  I believe I counted eight self-serve stations scattered throughout the cavernous lobby.  The aroma?  Spiritual Starbucks.  As a non-coffee drinker with a mortal fear of coffee breath, that particular hospitality held absolutely no appeal for me . . . but again, you could tell that along with the gathering music, it contributed to the same upbeat, positive, and caffeinated vibe of the church.

They opened the doors to the Worship Center about 10 minutes before the service began.  The room has the same kind of design as does our space — meaning it is a large, wide rectangle arranged in such a way that no seat is too far from the platform — though on roughly double the scale:  1600 seats instead of 800.

The band opened with little fanfare and launched directly into a three song worship set.  In The Cove’s projection system, the cameras zeroed in on band members while song lyrics were displayed underneath.  This is the style in most larger churches, though I found myself wishing for a longer look at the words of the songs and a shorter look at close-ups of a drummer. Probably just partial to my own setting and our own Chris Macedo.

After the music and a video testimony, pastor Mike Madding stood and delivered a message in the church’s Boom series.  Called “Margin,” it was an altogether appropriate message for a lake-dwelling, Panthers-loving, and Starbucks-drinking crowd.

I snuck out a little early so that I could make my way back towards uptown Charlotte and Myers Park United Methodist Church, led by Rev. James Howell, a colleague, friend, and frequent email sounding board.

If The Cove has a corner on the Starbucks market, Myers Park’s demographic is Neiman-Marcus.

My gosh, were the people there well-dressed.  And were they beautiful.  As I pulled into to a parking place for the 11:00 a.m. service — which I found only by prevenient grace, I know — I noticed the throngs leaving from the 9:45.  And there were lots of well-groomed people with lots of dressed-up kids all braving gridlocked traffic and antiquated parking to be part of Myers Park UMC.

It seemed to me that if people were going through all that inconvenience just to get in and out of church, then something worthwhile must be happening inside that Gothic architecture. 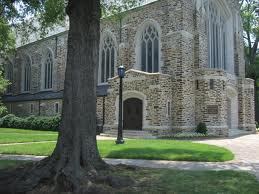 Now: no coffee.  No gathering music in the narthex, much less on the sidewalks.  No band, no lights, and no projection system.

But all those very attractive and nicely dressed people?  Awfully friendly.  They didn’t know that I was preacher incognito for the day, yet they were full of welcomes, smiles, and bulletins.  The pastors and choir all mingled with the people before the worship began — much like Chris and his band do with us.

And the service itself was both impressive and intimate.  Sure – there were synchronized handbells, a processional choir, trembling acolytes, imposing organ, and a gorgeous a capella solo on “I’m Gonna Sing ‘Til The Spirit Moves In My Heart.”

But there were also moments of homespun levity.  The church received new members during this service, and a pastor asked each one, “what do you like to do during the week?”  After several predictable answers ranging from cooking to tennis, the final gentleman joining the church admitted, “as little as possible.”

Finally, it was time for James to preach.  He started by quoting Jesus’ words in Mark 12:28:  “beware those who go about in long robes”  and then moved to the obvious irony in the room:  he preaches in a long white robe. 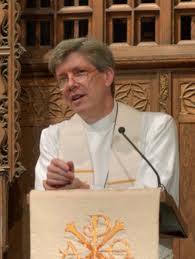 I can honestly say that I’ve never opened a sermon with an explanation of my clerical robe (!) nor used that as a reason to tell the church:  beware of your preacher.

But James did both.  And then he let us know that preachers are not “sugary doofuses,” to which I almost responded with an Amen!  But discretion really was the better part of valor in this case.

By the end, though, James had skillfully moved us from light-heartedness to heavy-mindedness, letting us know that the fact that Jesus really is watching (Mark 12:41) is both caution and celebration.

Then we had prayers, an offering, and another hymn, and that was that.

So what to make of one day spent at two very different churches?

Well, though we at Good Shepherd share denominational ties with Myers Park, we share stylistic and strategic ones with The Cove.  I could stand and deliver a Mike Madding-style talk on The Cove’s platform with much greater ease than I could don a robe and preach a sermon in Myers Park’s pulpit.

So the Methodist connection doesn’t seem at first glance to be as strong as the stylistic one.

But on second glance, maybe it is.  Why?

Because my experience at Myers Park was much more meaningful.  Not because I like the music or prefer the style better.   I don’t.

It meant more because of the balance of impressive and intimate.  The church with the Neiman-Marcus demo was willing to let new members hold a microphone and answer questions in an unscripted way.  It was willing to mix in some mirth with its majesty.

And since I know James Howell as a person, I was much more interested in hearing from him as a preacher.

So don’t expect me in a long white robe this next Sunday.

But do look for the ways in which we try to be big AND small, impressive AND intimate, professional AND personal.

And I, for one, will be back at home.