While I was rummaging through an old photo album, I came across some very funny pictures from when I was 16: 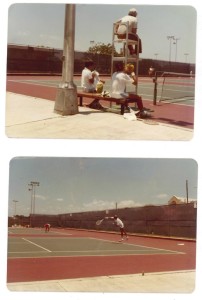 These come from the semi-final match of the 1978 Texas State Championship for Boys’ 16-and-under, played that year in the heat of San Antonio.

In the top photo I’m the one drinking out of the yellow water jug, and in the one on the bottom, I’m hitting a serve & jumping into the court.  Which means I’m not the girl in the red shorts bending over to pick up the racket she threw in anger just as I was starting the point!

My opponent that day is actually a bit more interesting than either my water-drinking or scissor-kick serving:  Sammy Giammalva.  While I managed to win this particular match 4-6, 6-0, 9-7 — and yes, 35 years later I remember the exact score and no, there’s nothing unhealthy about that — within a couple of years he became much better than I ever was.

He got so good that he bypassed college tennis altogether and went straight to the pro tour. So while I was slogging it out playing tennis with pointy-headed intellectuals up North, he was ranked as high as 28th in the world in the mid-1980s.

In fact, you know who Sammy beat one time in 1988?  Seven-time Wimbledon winner Pete Sampras. 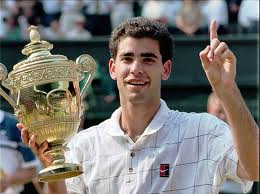 And I beat Sammy Giammalva?

You know what that means, don’t you?  Sampras is awfully lucky he never ran into ME on court . . .