When I was in college, I read a short story by Nathaniel Hawthorne called “The Unpardonable Sin.” 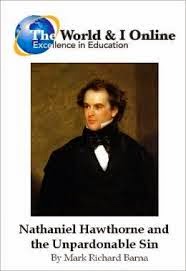 It was creepy, melancholy, and thoroughly absorbing.  I even wrote a paper on it in which I identified that the unpardonable sin was a throwaway line tucked at the end of the story.  Nathaniel was no longer around either to support or refute my interpretation.

If you’ve not read that short story but you have read The Scarlet Letter, you know that faith haunted Hawthorne much more than it ever comforted him.

Anyway, part of the reason Hawthorne’s faith haunted him had to do with head scratchers such as the one we’ll tackle this week:

28 Truly I tell you, people can be forgiven all their sins and every slander they utter, 29 but whoever blasphemes against the Holy Spirit will never be forgiven; they are guilty of an eternal sin.”

What in the world should we do with that one?  Well, I’ll tell you.