How God Answers The Worst Prayer In The Bible

In I Kings 19:4-5, in the aftermath of a roller coaster season of spectacular success and stunning betrayal, the prophet Elijah prays this prayer:

‘Take my life; I am no better than my ancestors.’ Then he lay down under the bush and fell asleep.”

It’s the worst prayer in the bible.  It’s a suicide prayer.

His trauma piles up, the weight becomes unbearable, and Elijah wants to end it all. And although it is the worst prayer in the Bible, I’m really glad it’s here. Because I know some of you have prayed it. Or you are praying it. Hope is gone because the marriage is over, the job market is closed, the voices are still in your head, the pain is relentless, so it seems there is no way out except to get out. Take my life. Do it now. Instantly. Painlessly. Fix it, take it, do it. I’m tired of being responsible for it.

That’s you. And that was Elijah. Except look what happens in 19:5b-6: “All at once an angel touched him and said, ‘Get up and eat.’ He looked around, and there by his head was some bread baked over hot coals, and a jar of water. He ate and drank and then lay down again.”

And in case you missed it the first time, the same thing happens in 19:7-8a: “The angel of the Lord came back a second time and touched him and said, ‘Get up and eat, for the journey is too much for you.’ So he got up and ate and drank.”

And the repetition is the key. The answer to this painfully large prayer is massively small: bread, water, and a bed. Elijah wants a snap answer, a quick fix, and God grants the start of a slow process – bread, water, bed. As if recovering hope can never be a matter of great leaps, but always involves small steps.

But it’s the double command: “Get up and eat,” that I love the most. You notice what God’s representative does? Puts the burden back on Elijah. God sent the provision but Elijah has to act on it to receive it. It’s not like the messenger put an IV line in and Elijah will receive nourishment whether he wants it or not. He had to act. He had to own. He wanted to be totally passive – wanted God to do something instantaneous for him. Either kill him or make him all better in a snap. But instead God gives a task, a massively small task: get up and eat. I’m sending bread, water, and a bed but you’ve gotta get up and take advantage of what I’m providing. And so you know what the repeated command tells me, all of you who’ve lost hope and want God to send a quick, thorough fix?

God won’t do FOR you what he needs to do WITH you.

He’ll only give you what you are willing to “own.” If he had delivered (or killed!) a thoroughly passive Elijah from the season of hopelessness, the same situation would have recurred again. Elijah had to assume some responsibility for his own healing, even if it was as small as getting up, eating, and then doing it again, for the healing to endure. The recovery of hope is not one great leap, it’s many small steps, but you have to take them.

God won’t do FOR you what he needs to do WITH you.

And that’s how he answers the worst prayer in the bible.

Would you like to free yourself from the power of sin and be empowered for faithful living? Pre-order my upcoming Bible Study book, Crash Test Dummies, to take the next step. 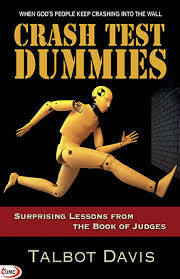