Yesterday’s message was to set the table for this: 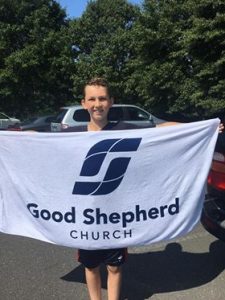 Planned baptisms followed by the spontaneous variety, all leading to a morning where, as Shane Bishop says, the church feels more like a movement than an organization.

And in what is perhaps the least coincidental coincidence of them all, after preaching this message involving the Ethiopian from Acts 8 and towards the end of the baptismal celebration at the 11:30 service, who came forward for baptism?

A young man … of Ethiopian descent.

Have you ever heard that phrase walking contradiction?  It’s when somebody in their very being embodies two traits or impulses or characteristics that are completely at odds with each other?  Like the introvert who craves attention?  The lazy workaholic?  The glutton who says drinking any alcohol is against his religion?  The rock band who is a socialist with everybody else’s money but judging by ticket prices are very much capitalist with their own?  It’s even like this notice I saw:  A moment of silence for all those stuck in traffic while driving to a gym to ride a stationary bike.  All: walking contradictions   You probably have some of that going on as well.  Maybe you’re a conflict avoider with a bad temper.  A deeply faithful person who harbors serious doubts.  Or fabulously successful but deeply insecure.  Or even you love Jesus but you love someone else, too – someone he’s told you not to love.  WC all over the place.

Well, today on Fresh Start we get to dig into an incredible story of a Walking Contradiction that leads to a rousing kind of conclusion.  And I am convinced that if you allow to happen to you what happened to the WC in Acts 8 … whew!  You’ll have the freshest of fresh starts and today, August 26, really will go down in history.  Look at Acts 8:26:

26 Now an angel of the Lord said to Philip, “Go south to the road—the desert road—that goes down from Jerusalem to Gaza.”

So Philip – who, let’s face it, is not as famous as Paul or Peter or even Mt, Mk, Lk, John, Crosby, Stills, Nash, or Young – he hears from God:  GO SOUTH. Cross the Hebrew Mason Dixon Line & head south. To a land flowing with grits and honey.  Like Abraham, Philip gets the general assignment with absolutely no specifics along the way.  Take the journey, son, and leave the destination to me.  And look who he runs into in 8:27:

27 So he started out, and on his way he met an Ethiopian[a] eunuch, an important official in charge of all the treasury of the Kandake (which means “queen of the Ethiopians”). This man had gone to Jerusalem to worship,

Now:  there is SO MUCH in this.  Here is a man who, likely against his will and at a very young age, was … unmanned.  A man deprived of much of what it means to be manly.  He is an Ethiopian, which means that if he is on the road to Gaza, is darker complected with different features than others like Philip. It also means he has travelled 2000 miles to get to Jerusalem & now he’s headed back.  But look what he went to Jerusalem for: to worship.  And yet he would have been refused entrance in the very temple he had traveled all those months to see!  Why?  Because in Judaism at the time, eunuchs (human geldings) were not allow in temple.  So he travels for months to worship God and yet is greeted with a stiff arm upon his arrival.       But there’s more:  it says that he is “an important official in the treasury.”  Which means he is wealthy, he is connected, he is an INSIDER. And he’s reading! Which very ppl could do! So he is an elite.  All the walking contradictions! He is an INSIDER who is REJECTED.  He is a WEALTHY MAN who is an OUTSIDER.  He is an EDUCATED ELITE who nevertheless is ISOLATED.  He is a VICTIM who also has his own history.  He’s an African who wants to be Jewish.  Whew! So many contradictions! So what happens when this mass of confusion runs into Philip? Ah there’s one other contradiction: he can read but he can’t comprehend.  Look at 8:28-31:

28 and on his way home was sitting in his chariot reading the Book of Isaiah the prophet. 29 The Spirit told Philip, “Go to that chariot and stay near it.”

30 Then Philip ran up to the chariot and heard the man reading Isaiah the prophet. “Do you understand what you are reading?” Philip asked.

31 “How can I,” he said, “unless someone explains it to me?” So he invited Philip to come up and sit with him.

And that’s where Philip – who with all the MOVEMENT in this text, you know he is being propelled by God – enters the chariot (the existence of which is another way you know the Ethiopian is loaded), sits next to the man and explains that Isaiah points to Jesus and Jesus points to the Ethiopian himself!  Why? Because so much of what Jesus is about is demolishing all the barriers to entry that had been set up against the Ethiopian.  Take a look at 8:32-35:

32 This is the passage of Scripture the eunuch was reading:

“He was led like a sheep to the slaughter,
and as a lamb before its shearer is silent,
so he did not open his mouth.
33 In his humiliation he was deprived of justice.
Who can speak of his descendants?
For his life was taken from the earth.”[b]

34 The eunuch asked Philip, “Tell me, please, who is the prophet talking about, himself or someone else?” 35 Then Philip began with that very passage of Scripture and told him the good news about Jesus.

Good news  The series of coincidences here is stunning; check 8:36a:

36 As they traveled along the road, they came to some water and the eunuch said, “Look, here is water.

Philip “just happens” to run into the man who just happens to be reading from Isaiah and after the explanation there just happens to be water there for baptism. And then, in the question of all questions, this Walking Contradiction, this guy with a history and perhaps even some mixed motives, asks in the rest of 8:36, “What can stand in the way of my being baptized?”

You may have asked the same thing, and you may have supplied the answers to your own questions.  Well, my background. Well, the way people reject me.  Well, there are those skeletons piled up in my closet.  Well, all those doubts I have. Well, the fact that I have too much money.  Well, my sexual history.  Well, the way I’ve let people walk all over me all these years.  Well, well, well …  The Ethiopian asks, you ask, and the question hangs in the air …

Until Philip answers it not with words but with actions in 8:38:

38 And he gave orders to stop the chariot. Then both Philip and the eunuch went down into the water and Philip baptized him.

DO DEMONSTRATION WITH PILING UP & KNOCKING DOWN.

Why?  How? Get this:  this water is thicker than blood.  The walking contradictions become baptized converts.  No thing can prevent when some ONE propels.  How about you, today?

I really love in this story how it is that God’s supply exceeds our needs.  Scripture? Check.  Teacher to explain? Check.  Sacrifice as described in Isaiah 53?  Check.  Water? Check.  Opportunity to reverse all the rejection and counter all the contradictions?  Check check check.  And wherever you are on your journey to starting fresh. It’s beautiful and it’s glorious, the extent to which God oversupplies your every need and overanswers your every question.

39 When they came up out of the water, the Spirit of the Lord suddenly took Philip away, and the eunuch did not see him again, but went on his way rejoicing.

The man is NEW.  Fresh. On his way back to Ethiopia.  You know what? There are Xns in Ethiopia today.  A lot. We have Ethiopians here at Good Shepherd. They’re awesome. They are HERE because of this baptism so long ago. Why? Because the eunuch to his joy, his exuberance, his new faith, and his fresh start and he told.  He’s the one who told.

See, he emerged out the water, like a baby breaking through the amniotic fluid of his mother, as someone new and different.  The old died. The new was born.  Whatever in him that was not of God washed away.  Because know this:  Jesus doesn’t baptize SIN.  He baptizes SINNERS.  Don’t expect him to make you feel good about your self-destruction and rebellion; expect him to empower you to kill it.  And then to dance away from that death with such rejoicing that every one around you will want to know what’s happened to you.