Forty years ago yesterday, January 7, 1979, I became a Christian.

I had been baptized as an infant in the Episcopal Church, but by the time I was four or five, my mom stopped going herself or taking her kids.  So I never went to Sunday School, never attended VBS, never was confirmed, never went to youth group.

The majority of my family at the time had feelings towards Christian faith that ranged from ambivalence to suspicion to rejection.  A pair of older siblings had become “born again” (a very 70s term … and a biblical one), but that didn’t hold much sway with me.  I remember announcing to my sixth grade class that I was an atheist, a self-description that almost certainly gained me more infamy than popularity.

Over the next several years I kept faith at arm’s length.  Some people I truly admired in the tennis world were strong Christians, but I figured that was more about them than more.  Nevertheless, through those examples, as well as that of my siblings, some of the ice began to thaw and I personally moved from outright rejection to grudging respect.

All that changed on January 7, 1979 … just after Christmas break of my junior year in high school.  My best friend — who had dropped a few hints regarding Jesus — spent the night at my house because Dallas was covered in ice and our place had electricity while his did not.  And as teenagers often do, we turned out the light and that’s when from his bed across the room he started talking to me.

It was Gospel smackdown.  There was some exegesis of the book of Revelation that I doubt either of us subscribe to anymore, but the point was clear:  Jesus ruled the world, he was coming back to claim it, and when he does you want to be on his side.

As he began, I asked him the question that I was sure would stump him:  “what makes Jesus any different from Buddha, Mohammed, Confucious, or any other religious leader?”

Far from being stymied, he gave an answer for the ages:  “Of all those guys, Jesus is the only one who claimed to be God and then proved it by rising from the dead.”

Because as he spoke, the room spun as if I was on The Scrambler at an amusement park.  It didn’t stop spinning.  (And before you ask: No.  No pot, no booze, no pills.)  I was being taken for a ride when the power of his words met the move of the Spirit and I knew:  this is not by coincidence.

God has been hinting, suggesting, wooing, and tonight he is CONFRONTING.  The divine confrontation declared: it’s TIME.  And so it was.

Shortly thereafter I prayed my first real prayer, which was the prayer giving Jesus ownership of my life.

You know what that means?

Here’s the text I sent my friend yesterday: 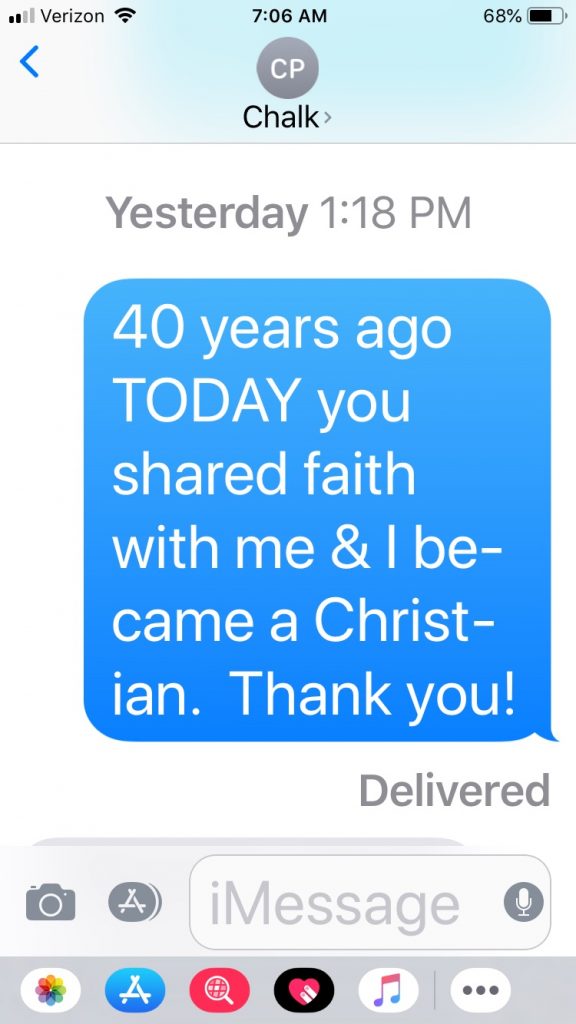