Yesterday afternoon, I attended the Installation & Celebration Service for Gary Royals, my new District Superintendent in the United Methodist Church. 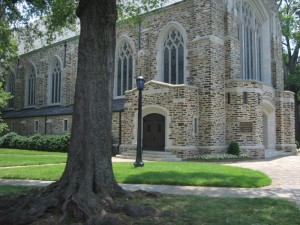 And the difference then becomes more apparent with the sanctuary design on the inside: 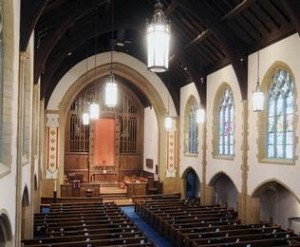 But nowhere was the “different world” more clear than in the celebration itself. Instead of gathering music downloaded from iTunes and played over the sanctuary’s sound system, we were welcomed into the space with antiphonal singing & chanting from choir members stationed in the balcony and therefore out of sight.

Instead of the thumps of a kick drum to start the worship set, the massive sounds of a pipe organ let us know it was time to stand and sing.

Instead of “O Happy Day” sung from projected lyrics, we began with “The Church’s One Foundation” sung from #545 in the United Methodist Hymnal.

And instead of a solo of the latest Matt Redmond, Chris Tomlin, or Coldplay tune, the special selections last night were a capella and a amplification (I made that word up) versions of classic Christian hymnody.

Instead of jeans and polos, the worship leaders wore robes and stoles.

So just when I thought there was simply no commonality between what happens at Good Shepherd and what happens in much of the rest of Methodism, it came time for representatives of the Charlotte District to give Dr. Royals tangible, tactile expressions of ministry as he begins to lead us.

One person gave him a loaf of bread — to lead us in communion.

Another gave him a pitcher of water — to lead us in baptism.

Another gave him a bible — to lead us in preaching and teaching the Word.

And yet another gave him a hymnal — to lead us in worship and praise.

It hit me: Elements! The same series we’ve been doing throughout July at Good Shepherd. It was as if all the sermon titles from the last month were staring me in the face: Bread, Water, Words, Notes.

Those tangible elements of worship and faith that far transcend differences in architecture, community, and liturgy.

Ephesians 4:4-6 puts it this way: “There is one body and one Spirit . . . one Lord, one faith, one baptism; one God and Father of all, who is over all and through all and in all.”