It was an interesting weekend in my family.

First, my wife Julie had been given tickets to the Ryder Cup in Chicago.  So she took her father, Ted Munoz, up north where they spent Saturday following the likes of Tiger Woods and Steve Stricker around the course at Medinah.  Fortunately, they were home by the time of Sunday’s American meltdown. 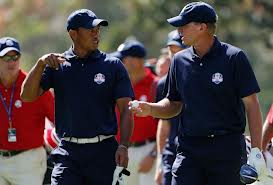 If you know Julie at all, you know that she lacks neither personal self-esteem nor professional self-confidence.  That is due in large part to the fact that Ted spoke hope and affirmation into her life from the time she was a toddler, so a weekend at the Ryder Cup is just one more in a long line of memory-making events.

Whilte Ted and Julie were in Chicago, I trekked down to Atlanta to attend Chipper Jones Night with our daughter Taylor.    Why attend Chipper’s big night in recognition of his retirement?  Because Taylor has been a fan since she was eight years old.  In fact, she wore her very own #10 Chipper Jersey to the game on Friday — a jersey we had given her for her tenth birthday (she’s now 23).

And although I’m not much of a Chipper Jones follower and not a serious student of baseball, my throat tightened and my eyes watered during the ceremony.  Why?  Well, there was the sight of Jones sitting next to Henry Aaron whom the announcer introduced as “the REAL all-time home run leader in baseball.”  Take that, Barry Bonds and your artificially enlarged chest, biceps, and head.

There were also Chipper’s words for Bobby Cox, his manager of 17 years, as well as his salute to his own parents.  It all impacted me to the point that while watching the ceremony I realized, “there’s no place I’d rather be than right here, right now.”

Something about dads, daughters, and memories will do that to you.