I think the story of how our new series “The Comeback Kids” came to “be” is an interesting one.

After all, it’s not often that a church will do a series based on the Old Testament book of Haggai. Yet that’s what we’re doing.

In the spring of 2010, I enrolled in a class offered at Good Shepherd but taught by Steve Klipowicz, a professor and friend from nearby Gordon-Conwell Seminary. The class was called “Hope For Troubled Times” and focused on a group of books known as the “post-Exilic prophets.”

Haggai is one of those prophets.

As Dr. Klipowicz reached that particular teaching segment, he taught us that Haggai’s purpose was to “rally” the people of Israel to rebuild their temple. As part of the class, he had us brainstorm on all the “rallies” we had been part of.

My mind immediately went to “rally caps,” a phenomenon in Major League baseball just a couple of years ago. If your team was losing a game, you adjusted your hat as in the picture below, it became the “rally cap,” and of course the headgear change would make your team come back. So I thought, “that will preach.” 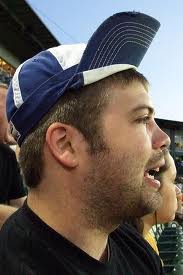 So my original title for the series was “Rally Cap.” We even toyed with the idea of giving away painters hats as a promo.

Yet when I tested the title on people around the church, it had no connection. Apparently only die-hard baseball fans — or people like me who even though we don’t care that much about baseball DO watch SportsCenter at least twice daily — are aware of the phenomenon of rally caps.

So back to square one.

Yet while mowing the lawn one day, it hit me. The Comeback Kids. Better title with a more universal appeal. The content of the messages wouldn’t change much, but the metaphor became much stronger.

As an added bonus, we’ll have “comeback stories” from the people of Good Shepherd throughout the series.

It all starts this Sunday with “When The Zoning Commission Votes You Down.” To prepare, take a look at both Ezra 4 and Haggai 1.

And then come prepared for your own comeback.