Clay Court Tennis, Me, And The Paradox Of Patience

If you are even a casual follower of the sports landscape, you know that the French Open tennis tournament is currently taking place in Paris.

In fact, as of this writing, it looks for all the world like Novak Djokovic is on his way to claiming his first title on the red clay of Roland Garros stadium. 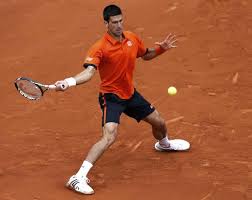 What I’m sure that you are less aware of is this: back in the day when I played competitive tennis, I was terrible on clay.

I did well on hard courts, a bit better the few times I could play on grass, but was simply awful on the dusty, slippery, granular clay court surface.  The low point of my tennis career, in fact, came on the two occasions my college team played up at Columbia University, who at that time hosted their matches on indoor clay courts on the northern edge of Manhattan.  I lost badly — dreadfully — both times.

Why so bad on the dirt?  In a word: patience.

And in tennis terms, I had no patience.  Point construction was a foreign term — I wanted to serve hard, get to net, and overwhelm my opponent.

If I got stuck on the baseline trading forehands and backhands, I’d usually end up on the losing end of that trade. The way the experts play these days on the red clay of Paris is almost incomprehensible to me.

So what’s the paradox of patience?

In life away from the courts, I am pretty patient.

My work life is regimented, consistent — scalable and repeatable as management experts say — and not given to wide swings of either mood or productivity.

I rarely give up on projects or relationships just because they aren’t going well.

I pay attention to detail on the things that matter to me.

I almost never lose my temper . . . a far cry from my tennis days when I could swear and/or throw a tennis racket with the best of them.  (On really skillful days, I’d do the swearing / throwing simultaneously!)

So why did my generally patient nature become so impatient when I stepped between the white lines of a tennis court?

I believe it has to do with self-talk.  For whatever reason, early in my teens, I told myself that I was inconsistent with forehands and backhands but very good with serves and volleys.

I told myself that I needed to finish points quickly because otherwise my opponent would outlast me.

My self-talk then became some thing much worse: a self-fulfilling prophecy.

That which you say to yourself often enough ends up happening.

You can likely convince yourself that you are patient. Or not.

As I process this by writing it out, I realize that I could have used a Good Shepherd style BrainWashing a long time ago.