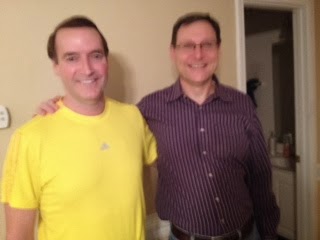 We had a houseguest last night:  Claude Kayler, Good Shepherd’s founding pastor.  He was in Charlotte on Sunday evening before catching a Monday flight to Israel.

Claude gave birth to the church in 1991 and led it until 1999.  Today, he is the pastor of Covenant Community United Methodist Church in Asheville.

Here’s what you need to know:  transitions between founding pastors and second pastors almost never go well.  Churches take on the identity of their initial leader and any subsequent leader has built-in liabilities in terms of trust, style, and influence.

Yet the transition at Good Shepherd was remarkably simple in 1999.  Why?  Three reasons, all having to do with Claude:

1.  Theological consistency.   Claude and I have always been kindred spirits in that we are on the theologically conservative end of the Methodist spectrum.  So the people of GSUMC had no discontinuity in terms of what they were taught and what we stood for.

2.  The church’s foundation.  Many founding pastors build their churches around themselves and their personalities.  Not Claude.  He built Good Shepherd around Christ & on the person of Jesus.