Yesterday in this space, I shared the good news that in September of 2017, Abingdon Press will publish my sermon series Crash Test Dummies as a small group resource and study guide.  It will be the fifth such book in the last three years.

Yet I also shared how the series almost never saw the light of day.

Here’s why:  in the spring of 2016, I had a title:  Crash Test Dummies.  I had a concept:  address the myriad ways in which people keep doing the same dumb things over and over.  And I thought I even had a biblical book on which to base the series:  the Old Testament book of Judges.

And that’s where the trouble started.  As I began my study and preparation, Judges proved to be a nearly impossible nut to crack, much less to preach on.  This was the case for several reasons:

And then I remembered the closing verse of the book, Judges 21:25:  In those days Israel had no king; everyone did as they saw fit.  More literally:  everyone did what was right in their own eyes.

In a moment of clarity, I realized:  that’s the point.  There is no redemption; the inspired author has told his history as a series of increasingly downward spirals, and anarchy is the result.  The book doesn’t make sense unless you read the last sentence first.

That’s when my inner English major took over.  John Irving, author of The World According To Garp, A Prayer For Owen Meany, and Cider House Rules, is known not only for writing complex, layered, hilarious novels, but he is also known for a writing process in which he writes the last sentence of his novels first. 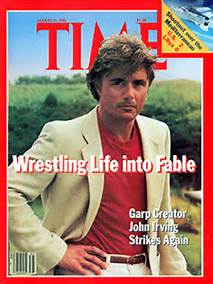 Only when he has the concluding line down and on paper can he go back and develop his characters and twist his plots.  The last line first and then the novel is able to be written.

So I envisioned a moment where Judges’ inspired author, no doubt depressed by the history he was tasked with telling, had a similar moment of clarity:  “Let me write the last sentence first!  Then and only then can the rest of the history unfold!”  I’m not sure it happened that way, but it sure makes sense to imagine that it did.

That concept gave me a hook for the first message in the series (what will be the first chapter in the book) as well as a grid through which I could preach & teach the rest of the book.  I didn’t have to turn Samson, Gideon, and Jephthah into heroes because they weren’t — they were merely entertaining stops on the downward spiral to everyone [doing] as they saw fit.

The insights into authorship & composition are part of what drew the Abingdon editorial team to the content of Crash Test Dummies in the first place.  They were also intrigued that one of their authors actually had enough material on the book of Judges to turn into a profitable study — it’s not up there with, say, the Sermon On The Mount or Psalm 23 as a subject for preaching, teaching, or devotion.

So: how to take a book that’s long on mayhem and short on redemption and turn it into a sermon series (and a book) with some hope?

That’s the subject for tomorrow’s blog.