So we started The Comeback Kids yesterday.

Along the way we discovered some common threads between Bruce Springsteen, PTL, and the prophet Haggai.

Springsteen’s haunting “My City Of Ruins” describes so well a land and a people in desolation:

So yesterday John Pavlovitz sang it, backed by Chris Macedo and the GS Band. It was terrific.

Then the sermon opened with a photo of the yet-to-be completed Heritage Tower on the campus of the former PTL club in nearby Fort Mill. Construction on the tower stopped in 1987 and hasn’t resumed since. 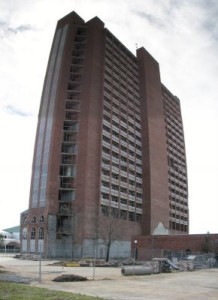 Just like the unfinished Jerusalem temple in 520 B.C. Haggai is charged by God with motivating the people of Israel to begin their own “comeback” and finish construction on the building that had been halted 16 years earlier.

Cities in ruins, buildings half-finished, and Bruce Springsteen in church.

Sounds like a good way to start a comeback.