This is a busy week around the Good Shepherd campus when it comes to the fight against human trafficking.

First, we hosted a Breaking The Chains Conference on Tuesday, August 21.  That event filled our church with social workers, law enforcement personnel, and elected officials who brainstormed together on ways to combat the modern day slave trade that is the sex industry in the U.S.

We were honored to provide space to the cause. 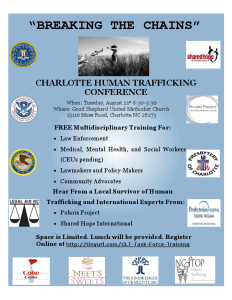 But it doesn’t stop there.

This coming Saturday, August 25, we are providing space for a Pre-DNC Restore Freedom Rally held by NC Stop Human Trafficking, an anti-human trafficking outfit with whom we are good friends.

That event will be in our Corner Campus (directly across Moss Road from our main campus in what used to be a Hollywood Video Store) and runs from 10 a.m. to 3 p.m.  You can read the Charlotte Observer’s coverage of the rally here.

The upcoming Democratic National Convention in Charlotte will of course brings thousands of visitors to Charlotte which, unfortunately, brings hundreds of additional workers in the sex trade which, in turn, involves many young women who are trafficked into that work in the first place.

So: during the first week in September, Charlotte will not only be in the middle of the political world but in the tragic epicenter of 21st Century slavery and forced prostitution.

Lest you think sex-based human trafficking is a partisan issue, organizers and advocates expect the same surge in both demand and supply during the Republican Convention in Tampa next week.

Being part of this modern-day abolition movement is nothing new to Good Shepherd.  As a lot of you know, we celebrated Christmas 2010 in a most unusual way.  Instead of mangers, sheperds, stars, and babies, we talked about slavery, brothels, freedom, and money.  And the people of the church responded by giving $207,000 to our partners at the International Justice Mission.  I posted on that movement of this church here and here.

Yet, as the name of our partner implies, that money went to win freedom for sex slaves overseas — India, Cambodia, and Thailand.

Our efforts this week bring the battle home to the Carolinas where trafficking is much more prevalent than most people suspect.

How can girls who are enslaved have a living relationship with Jesus Christ if they can’t first have a life?

We hope and pray our hospitality this week makes a difference and gives some life.