Heath Bradley is a teaching pastor and emerging scholar based out of the Pulaski Heights UMC in Little Rock, Arkansas.

We have become cyber-friends and he invited me to use this blog to review his new book, Flames Of Love:  Hell & Universal Salvation. 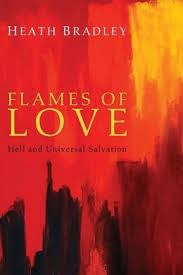 Much like John the Evangelist who gives the purpose statement of his Gospel near the end (John 20:31), so Heath Bradley provides the most compelling motivation for his book Flames Of Love on page 131:

In fact, I’d love to get to heaven and discover that he is right.

From the viewpoint of earth, however, I don’t believe he is.  The repeated finality of the majority of biblical passages plus the collective wisdom of those closest in time to Jesus lead me to the conclusion that whether it’s salvation or separation, eternal in fact means forever.