A few years ago, I went through a season where I read Paul’s letter to the Colossians every morning.    Since the New Testament epistles were designed to be heard/read/experienced in one sitting, I thought we’d give it try that way.

It proves to be much more fruitful than simply reading a devotional chapter a day, as you are able to get Paul’s point and his passion in totality rather than in isolation.

Anyway, Colossians 1:22 has this interesting expression:

But now he has reconciled you by Christ’s physical body through death to present you holy in his sight, without blemish and free from accusation . . .

Why that emphasis on physical body?  Why not just “body”?  Or why not just “sacrifice” or even “cross”?

For far too long, American Christianity has assumed that the ultimate goal of the Christian faith is for its followers to become disembodied souls at death.  You die, your body goes in the ground or urn, and your soul ascends to heaven where it cavorts on clouds and strums on harps for all eternity.

That’s the American wish, not the New Testament hope.

Instead of eternal souls, the New Testament grounds its hope in resurrection bodies:  that at the end of all days our spirits will be somehow, someway become reunited with a glorified and perfected version of our earthly bodies.  Here’s our Paul’s words it in I Corinthians 15:42-44:

Which sheds light on Paul’s reminder to the Colossians that their reconciliation to God is due to what happened to Christ’s “physical body”:

Because what happened to Jesus’ body will ultimately happen to ours.

His resurrection is the downpayment for yours.

The Christian faith isn’t about spiritual escape; it’s about physical restoration.  When you look at the New Testament through eyes that are a little more Jewish and a little less Greek, you see the inherent earthiness in it.  It is raw, gritty, physical, and bodily.

The Creed summarizes it beautifully: 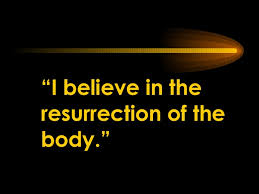 What implications does all this have for our lives today?  Paul, again, this time in Romans 12:1:

Therefore I urge you, brethren, by the mercies of God, to present your bodies a living and holy sacrifice, [a]acceptable to God, which is your [b]spiritual service of worship.