Best. News. Ever. An Easter Sermon

I gave this message five times between 5 p.m. this past Saturday and 12:30 p.m. on Easter Sunday.

My memory worked well almost every time — some sermons have a “flow” that is easy to maintain and recollect, and this was one of them.

It also has one of my favorite bottom lines:

The power that resurrectED is still resurrectING.

You know that phrase, “a little part of me died inside?” It’s pretty common; it’s the first cousin of when you tell someone: “you’re dead to me.” Only we don’t so much use it to talk about others; we use it to refer to ourselves: dreams dashed, hopes halted, plans prevented. Sometimes it’s lighthearted and other times it’s heavy handed. Sometimes it’s all too real.
You know what I’m saying. A little part of you died inside when the party was a bust, when the date didn’t turn out well – or when she wouldn’t go out with you in the first place! – when you were a new mom and you’re mom just couldn’t help but criticize your parenting skills.

Goodness, I know mine. From roughly age 8 to age 18 — when, unfortunately, I often looked like this: 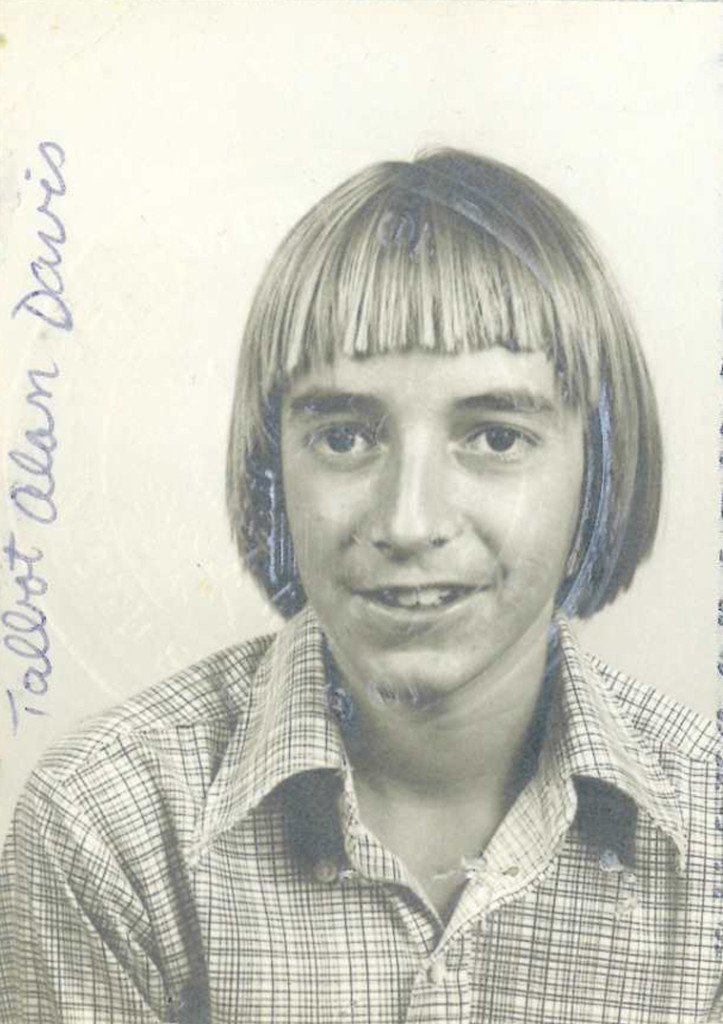 (That was my passport photo at age 14 — can you believe they let me back in to the country?)

— during that time in my life, I had one dream, one thing alive inside of me: grow up to be a pro tennis player. And then when I was 18 I played in a small-time pro tournament in Amarillo, Texas & I lost. And BOOM I realized: I’m not good enough and I’m likely not going to be good enough. And little – no, a big – part of me died in the Texas panhandle.

Or you may not even know this, but all growing up our very own Chris Macedo wanted so much to become this: 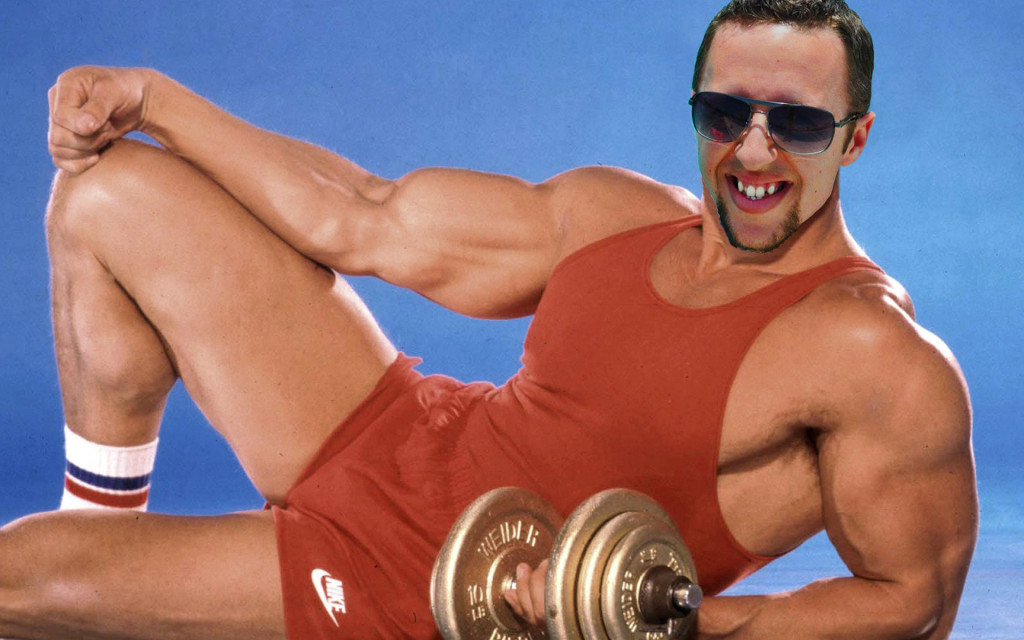 But instead of that, we got this.  And we love him because he can actually fit into skinny jeans.

But there’s more. In here. Someone here dreamed of a white picket fence and what you have is a couple of divorces behind you and blended family challenges in front of you. And when that white picket fence got torn down, a little bit of you died inside. Or someone else had that dream of a degree and a career but you never could afford the degree so you never could get the job. And that dream died inside. Or even a few of you have that dream of happiness but then depression settled in and you had to adjust your dreams: just get off meds, please. And I know for sure more than a few of you have had this idea for ministry but for a variety of factors it hasn’t happened and that little part of you died inside. Things large, things small, things trivial, things painful, and the truth is a little part of us so many of us has died. Your brought that death in here with you, even on Easter.
And all that is why we’re culminating the 4U series today. It’s been a series of talks coming from four short verses in Romans, a section that most stands out because of the three times repeated for us. We’ve seen over the last couple of weeks to our great delight that God – in spite of evidence to the contrary – is not alienated from us, not distant from us, not ignoring us, not even made at us. He is fundamentally for us, for you, no exceptions. And when you know that, you realize that anyone or anything that is against you has no chance. And the most striking thing in today’s verse –

34 Who then is the one who condemns? No one. Christ Jesus who died—more than that, who was raised to life—is at the right hand of God and is also interceding for us.

– is that we see Paul NOT writing, but dictating a letter to a whole collection of Roman Xns who have had a lot of things die inside them – security & prosperity chief among them – precisely because they follow Jesus. And Paul’s reminding them that God’s not just with them; he is so for them that he is ahead of them. Anyway, you see how it is that he is composing/dictating  in 8:34: Who is the one who condemns? No one! Christ Jesus who died – WAIT! (I can’t forget this, Tertius!) More than that, who was raised to life! . . . I love that. It’s one of a couple of examples in Paul’s letter where you can literally see his dictation process at work.
Was raised to life. Huh. Before I go further, that’s true you know. We come together on Easter not to remember a myth but to celebrate an event. Not to concentrate on a philosophy but to commemorate history. Real, live, pulsing with love event. The grave could not contain the power of his name. Think about it this way, people: if the Roman government in charge of Jerusalem at that time had been able to squash the rumors that Jesus had risen from the dead and to kill the burgeoning Jesus movement – both of which they desperately wanted to do – all they would have had to do was produce Jesus’ corpse, put it on display in the city center and say, “here is your risen Savior!” But they didn’t. They didn’t because they couldn’t. Hallelujah! They didn’t because they couldn’t! The power to reverse molecular decay, the power to empty a grave was alive in Jesus. All that from Paul’s can’t-contain-himself pause there in the first part of 8:34!
But then the next part which is actually the best part.

That right hand of the Father doesn’t mean that they are on a set of Lay Z Boys but it was an ancient way of declaring he rules. He is God. The right hand is the same as. And is interceding for us. Praying, maneuvering, invading, working. Not in the past – WAS RAISED – but present: is seated and is interceding. Why? The last two words! Against us! Nope! For us. See while we at GS are very careful and a little bit emphatic to teach & say the rez happened – literally, bodily, historically – for Easter 2015 I am drawn to what continues to happen. And the thrilling implication from Paul’s dictation is that the power that accomplished Jesus’ resurrection is still working on yours. Not tomorrow. Today. Not then. Now. So you are not abandoned or ignored or tolerated but you are his work in progress.

Here it is: The power that resurrectED is still resurrectING. That’s it! It’s who God is and what God does!
See, you come in to church, I come in to church with parts of us that have died and so Jesus is busy working in ways large and small, visible and invisible to bring those back to life.
I know this. I’ve seen this. I’ve lived this. Even that gonna be a tennis pro dream that died inside of me? What rose back up. This!  5:00 last night, 7, 8:30, 10, and 11:30 this morning! Praise God, this. I joke about being bitter, but I’m not.  This is a much better way of using my life than wearing shorts and waving a racket!

Lord, about eight years ago now I had this dream of being as cool as another church up north. And that dream died when I realized we were horrible at being them. And yet it rose to life in another form with inviting all people . . . We’re not half bad at being us. The power that resurrectED is still resurrectING.

Do you know why this is true? Because God is not an ED, he is an ING. He’s not God of the past, somehow trapped in the pages of an ancient library; he is God of the now, an ING God. When you come to grips with that, just think of all that ING that he is involved in: ANNOYING, PURSUING (you who’ve run away from him, he is faster!), OPPOSING, SURPRISING, REMINDING. Man, I’ve got a guy in my life who every time I see him is this visual, vivid reminder: Pray. He’s not preachy about it, just authentic in it. That’s God reminding me, resurrecting in me the part of me that had died to prayer because I was too cool or sophisticated or blasé.

God has done that for you, too. God has done that through you, too. You look back in the rear view mirror of your life and you can identify those parts of you that died – finance, marriage, ministry – and now you realize several years later he resurrected it. He is resurrecting it. That power that resurrectED is still resurrectING.

But now I need to tell you what you already know and are probably suspecting: what raises is not the same as what died. Related, often, but fundamentally different. Jesus’ own body, after all, was recognizable after the resurrection but quite different. He could appear & disappear; he could move through doors; he could even veil his identity like with the two travelers to and from Emmaus in Luke 24. It’s why I love that woman in our church who in the 90s (remember them? A century ago?) had a good Charlotte life: good job, happy marriage, great city. But then she began to lose her vision.  And despite prayer and medicine, she kept on losing it.  Gradually, she had to stop driving, then stop working, then give up most of her independence.  An enormous part of her — the part that sees! — died inside.  But Jean Obi decided to allow God to resurrect something else. She realized that though she was legally blind, she could still coordinate meals within this church — meals to people who are sick or grieving or celebrating a baby.  And we did the math – and between 1997 and 2014 Jean Obi coordinated the distribution of 4,612 meals.  Tell me that’s not The power that resurrectED is still resurrectING!

Our ING God is doing the same thing in here, right now. It’s hitting some of you now. Raising a woman who is strong enough to endure a divorce; a man resourceful enough to thrive in unemployment; an adult who had part of you die when mom and dad always withheld approval and it hurts to this day, and yet now you have that sweet certainty that in Christ you have been stamped: APPROVED. Tattoed: LOVED. Sealed: FORGIVEN. And that realization of who you are in Christ more than makes up for who your parents weren’t for you. The power that resurrectED is still resurrectING.
And lets’s be truthful: when part of you dies . . . sometimes it needed to. Sometimes Jesus was doing you an enormous favor by ensuring its death. If Jesus was an ED Lord instead of an ING Savior, you would have self-destructed long ago. Thank God for those smaller deaths that pave the way for the biggest rez.
And here’s the thing about Easter. You know how sometimes you get those direct marketing letters in the mail telling you that you have PREQUALIFIED? Prequalified for a new car, a better house, or may favorite, mountain property?! Well, that’s what the resurrection does: it prequalified you for eternity. Because – and you know this – there is coming a day when it won’t just be part of you that dies, but all of you. And today I want you to surrender to that. He is resurrecting your spirit. I know there are a few of you today and the part of you that died is that part that believed in Jesus. Bad luck, busy life, just plain sin . . . but that’s what died. And I wouldn’t want you to leave here today without realizing and responding to the overwhelming reality that he is resurrectING that, today. And he invites to respond to his ING with surrender to belief, trust, hope; to joining his side. You’ve been prequalified for eternity; today’s the day to sign up . . .